Kinatechs | 2020-08-13 04:34:59 | Source: Banggood (Sponsored)
Coupons are available for Xiaomi’s newly released entry-level model, the Xiaomi Redmi 9C. In a Banggood store promotion, the Redmi 9C with a huge battery can be ordered for as little as $109. 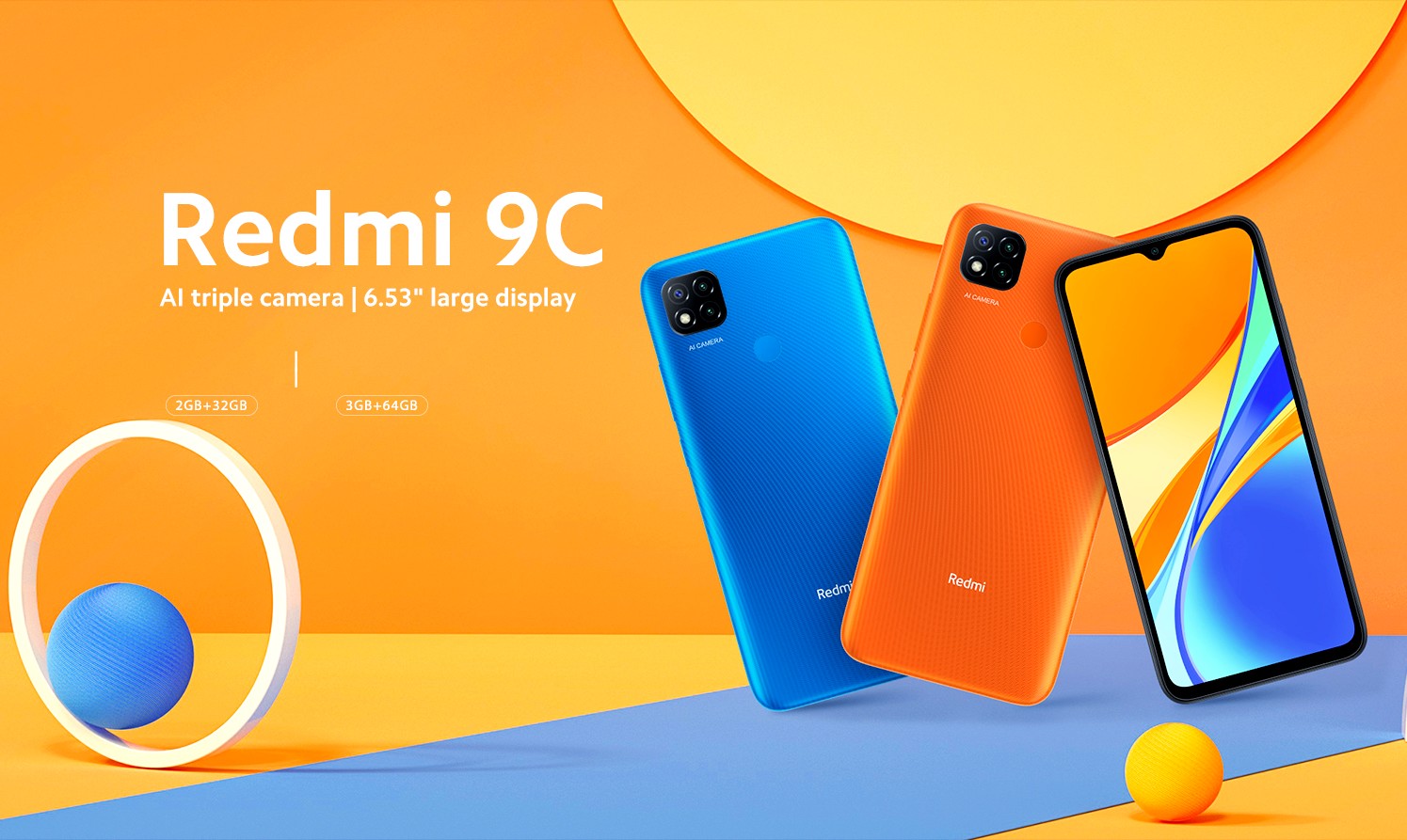 It’s true that Redmi’s latest entry-level models, the Redmi 9A and Redmi 9C, were released in July, but only recently appeared in online stores.
Both Redmi models are targeted at the entry level and are indeed available at a very good price compared to their knowledge. A great example: the Xiaomi Redmi 9A coupon with a 5000mAh battery is available for as little as $89.
The Xiaomi Redmi 9C, with a more powerful (Helio G35) processor and a more varied rear-facing camera configuration, may be an even better  choice than the Redmi 9A. In Banggood’s coupon promotion, for the version with 2GB of memory and 32GB of storage, it’s currently $109.
Purchase coupon code required: BG8R9C


The Xiaomi Redmi 9C is Redmi’s entry-level model released in early July, which ranks between Redmi 9A and Redmi 9 in both knowledge and price.
The front panel features a 6.53-inch IPS display with a resolution of HD+ (720x1600 pixels). MediaTek's new eight-core system chip, the Helio G35, delivers superior performance without sacrificing gaming thanks to "HyperEngine" technology.

In addition to the MediaTek SoC, you can find LPDDR4X memory and eMMC 5.1 mass storage, but their amount varies depending on the version. The cheapest Redmi 9C, which is also in action, comes with 2GB of memory, along with 32GB of expandable storage. In addition, in online stores, a little more expensive of course, but we can also find 3GB/64GB and 4GB/64GB Redmi models.
On the back of the Redmi 9C, as opposed to the Redmi 9A’s only camera, there are three: a primary camera with 13 megapixels, PDAF, f/2.2, a 5-megapixel f/2.4 macro, and a 2-megapixel depth-sensing sensor.
And one of the strongest points of the device is the huge 5000mAh battery, which provides exceptionally good operating time with these hardware parameters. According to official data, this is enough for 147 hours of listening to music, 33 hours of phone conversation, 16 hours of gaming or 19 hours of continuous video viewing.
Thanks to advanced technology, the Redmi 9C's large battery does not lose its capacity even after 900 charges. This means that if you spend it every day, it can be used smoothly for about 2 and a half years. But most likely, for most users, thanks to the excellent uptime, it will be enough to just plug the device into a charger every 2-3 days. 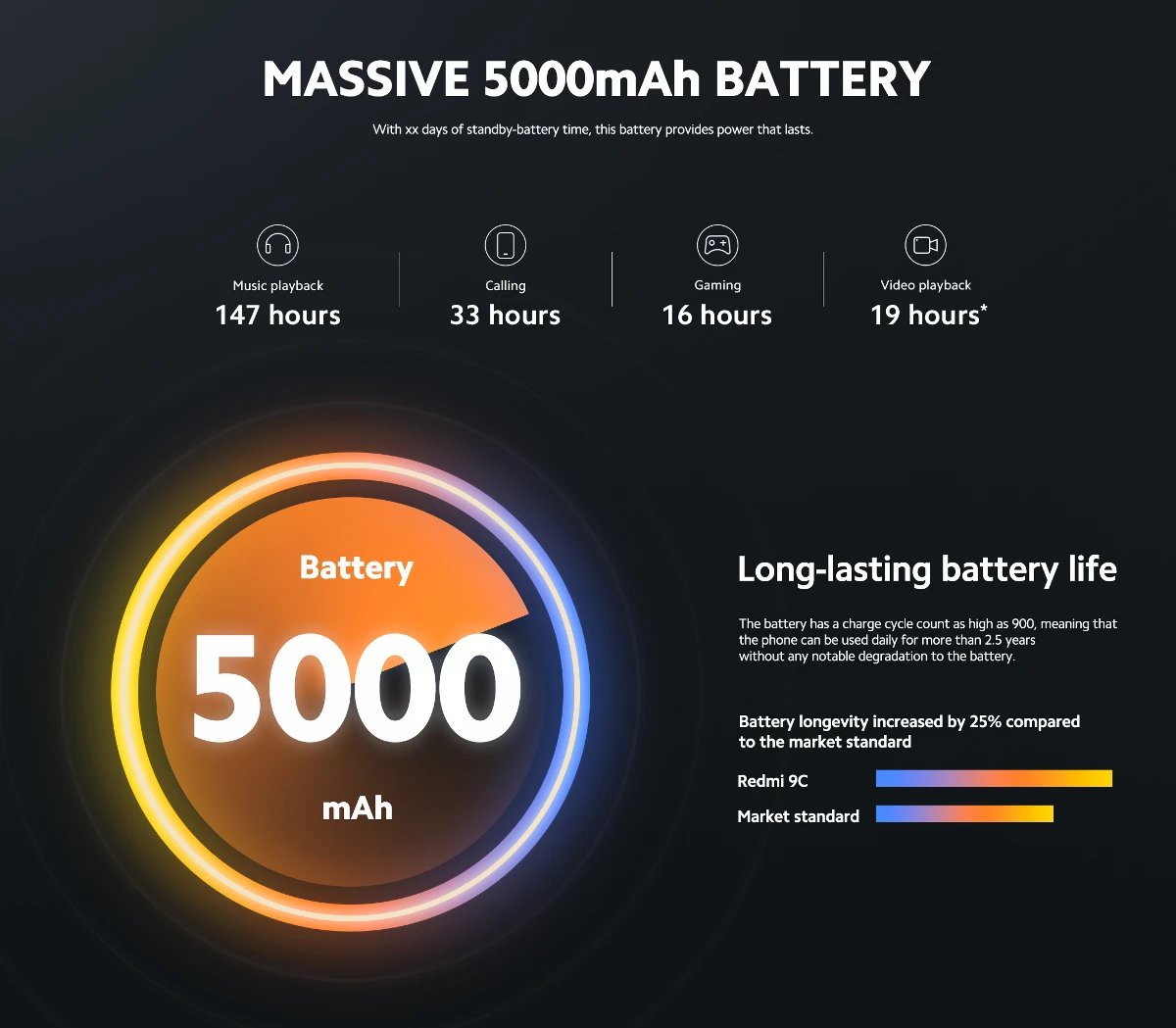 The international edition of the Redmi 9C comes with the multilingual, MIUI V12 operating system based on Android 10, so after the first setup, everyone can use it in their own language.
In terms of wireless connections, it can be said to be average: Wi-Fi 802.11 b/g/n, Bluetooth 4.2 support, NFC and infrared unit are not available in this model.
There will also be no problem with mobile networks in Hungary, as all frequencies, including the B20 (800MHz) 4G LTE band, are supported by the new Redmi device.
The Xiaomi Redmi 9C has arrived in a very saturated market, even in-house, but thanks to its price of $ 109, it can be an excellent choice among entry-level phones.
Selection, luckily in this price range, nearly $20 cheaper, is also available in the Redmi 9A, with fewer cameras and a hair lesser than the Helio G25 processor.
And for a little more, you can also buy the much more powerful Redmi 9 with NFC, more memory and mass storage (with coupon code - for $119.99).
Available in twilight blue, sunset orange and midnight gray, the Redmi 9C is available at the Banggood store for $109. The 3/32 version is priced at $139.99 in the GearBest store and the 4/64 edition is also priced at $149.99 in the Banggood store.
Coupon code required for 2/32 Redmi 9C: BG8R9C

You can find even more Xiaomi coupon codes on our site in our coupon section.
More news