UMiDigis most powerful rugged phone, the UMiDigi Bison GT is available for only $239.99

Kinatechs | 2021-04-05 16:23:48 | Source: Banggood (Sponsored)
An improved version of the popular UMiDigi Bison rugged phone, the UMiDigi Bison GT, has arrived. The new model is trying to win the trust of customers with a more powerful processor, 8 GB of memory, NFC support, a 64 MP camera, a larger display, a larger battery and last but not least a great price.

Last October, Umidigi launched its first rugged mobile phone, the Umidigi Bison phone, which offered protection against water, shock and dust very cheaply, equipped with all the right hardware. Available at the Banggood store, which is still available at a good price for just $150, the model is still popular among cheaper rugged mobiles.

There was not much to wait for the blood refresh, as Umidigi already announced in early March its wrinkled Bison model, the Umidigi Bison GT phone, which could now be ordered in an introductory promotion. The promotion is already in full swing, but knowing Banggood’s marketers, the price isn’t likely to jump back to $330 even after its April 5 expiration.

You can buy the Umidigi Bison GT rugged mobile in its current promotion at the Banggood store for $249.99. But during the promotion, there is also a $10 discount coupon available that you can activate using code BGUMGT329.
Thus, the final price of the Bison GT is $239.99.

The Umidigi Bison GT is the manufacturer’s second rugged mobile, and while the primary goal in designing the base model was price, the GT was more usable. The Umidigi Bison was an entry-level rugged phone, so of course it had its flaws, I’m thinking here of weaker camera capabilities and not-so-strong hardware. In the case of the new model, the manufacturer seems to have taken care to fill or rectify these shortcomings. In any case, the manufacturer did not leave things to chance, it included sound parameters in the promotional material and in the description of the device. 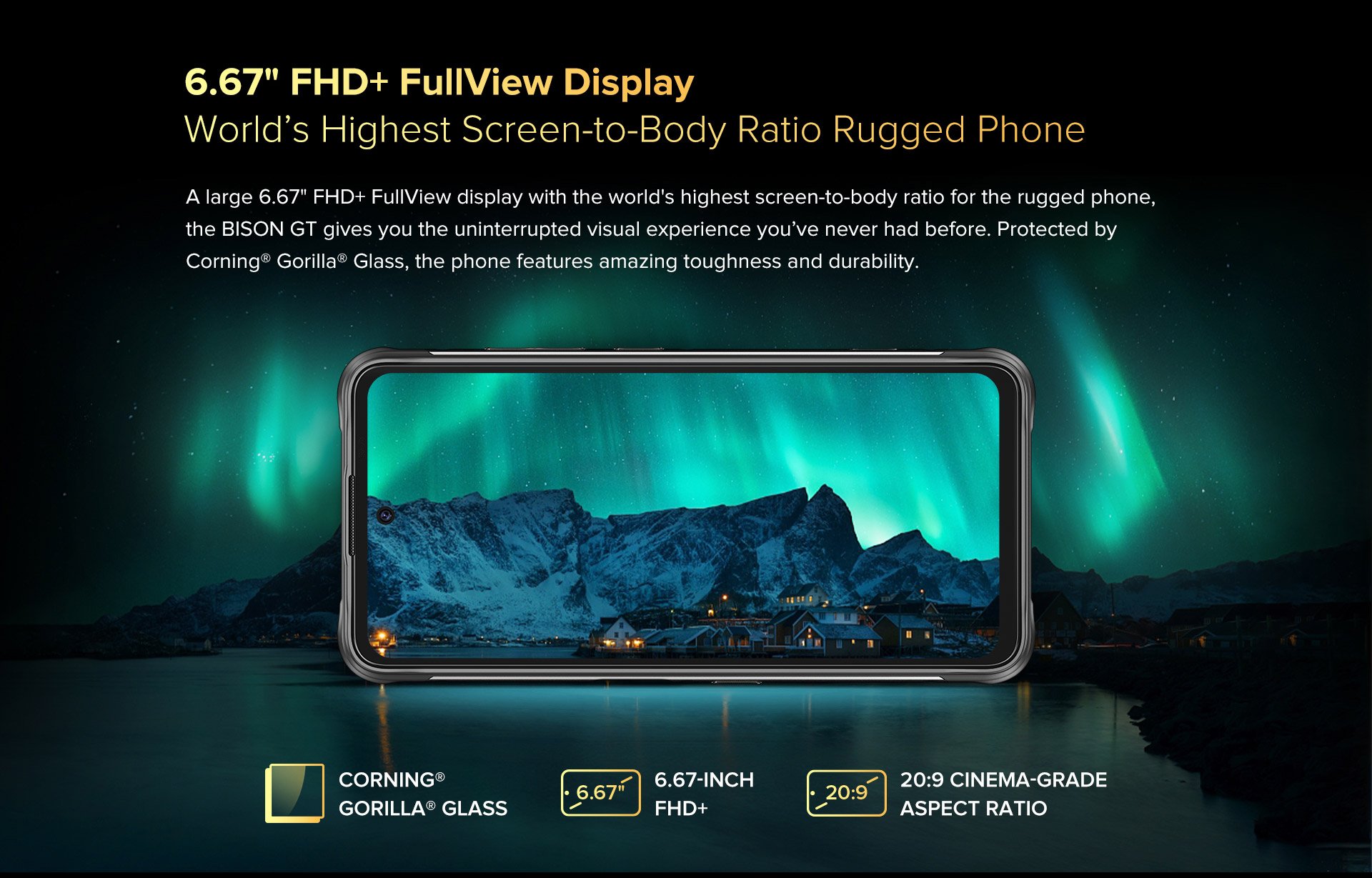 For a rugged mobile, size is not a primary consideration, whoever buys such a device must accept that these products are much heavier and larger than the average mobile. The base model was no longer small, the new version grew even further. The 6.67-inch FHD + resolution display can be said to follow the trends, but its size is especially large (170.3 x 82.5 x 12.8mm), weighing almost 300 grams (283 grams). It is also true that the Ulefone Armor 10 5G with a similar display is still smaller and lighter. According to Umidigi media, the Bison GT has the best display / front panel ratio. 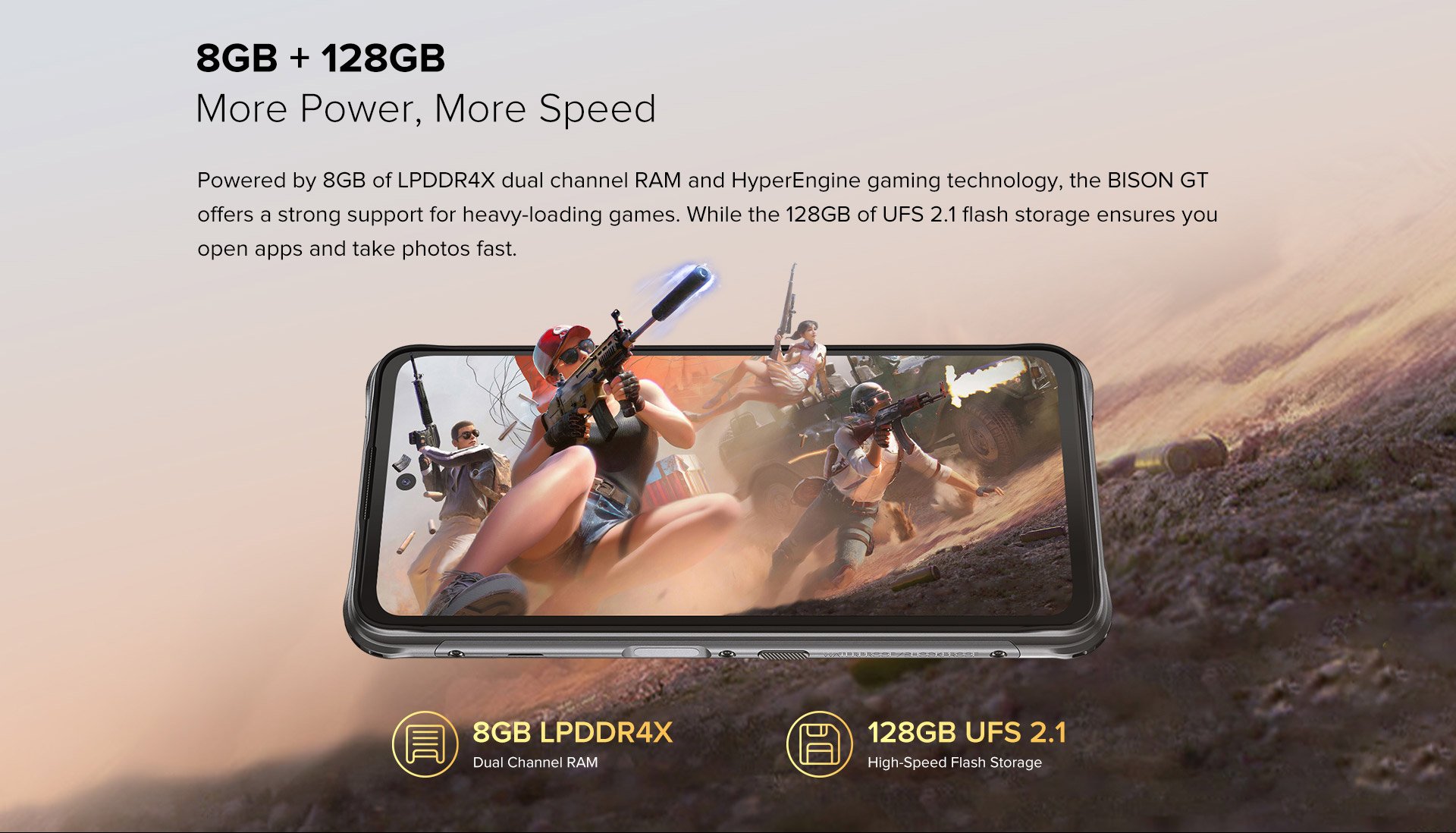 Underneath the back cover is MediaTek’s eight-core Helio G95 system chip, which we’ve already seen from the Realme 7 or Redmi Note 10S phones. SoC is particularly strong in this price range and is also great for gaming. In addition to the processors, we find 8 GB of LPDDR4X memory and 128 GB of UFS 2.1 internal storage. 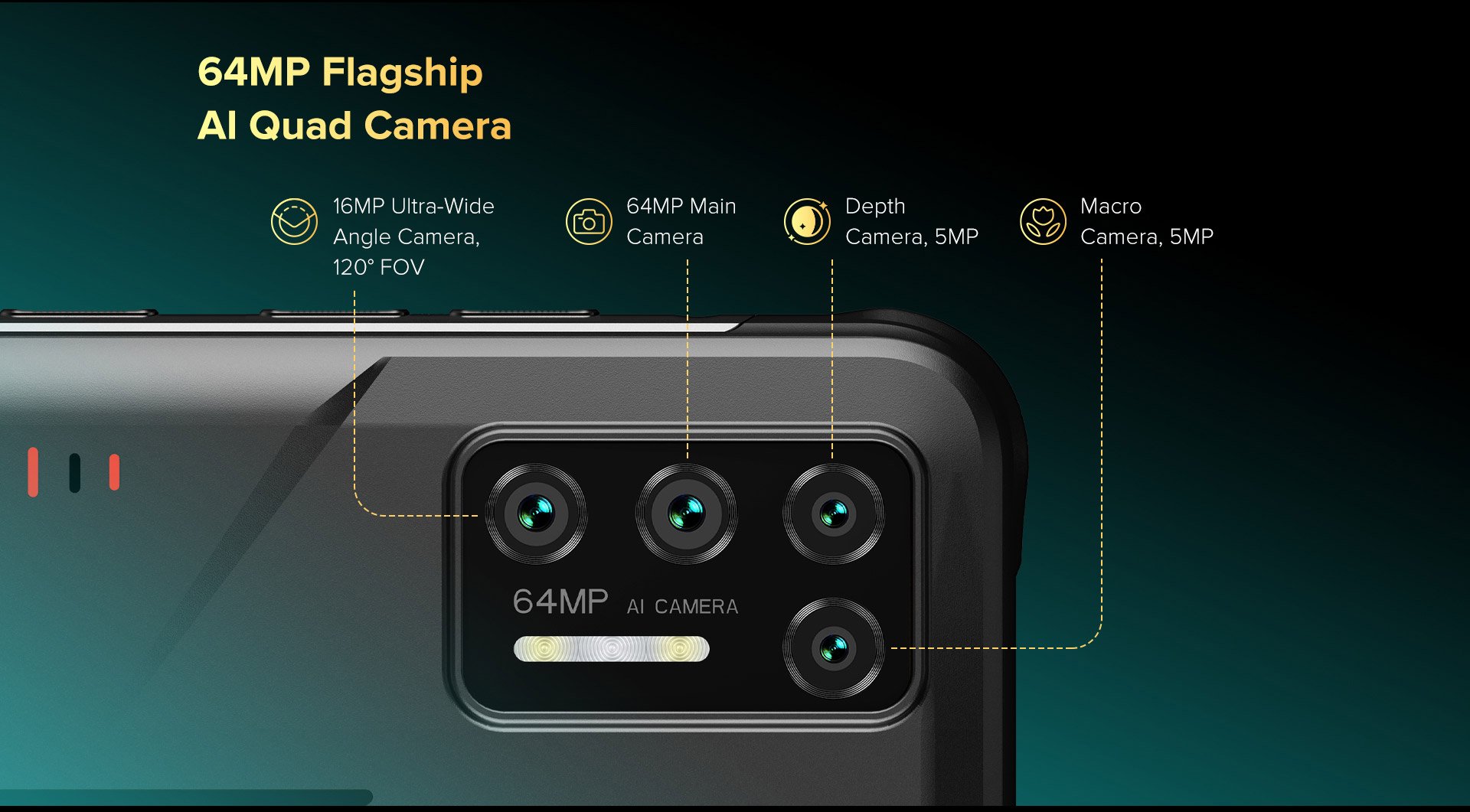 The camera system has also been improved, with the new model already featuring a main camera with a 64 MP f/1.7 aperture, a 16 MP ultra-wide angle (120 degrees), a 5 MP macro sensor and a 5 MP depth sensor. The phone has a separate capture key, which can be especially useful when the touch screen is difficult or impossible to use (such as underwater photography). The front panel features an extra-large 32-megapixel self-timer camera.

So on paper, the Umidigi GT looks pretty good while taking a photo, but of course the saying is true here too, the test of pudding is eating. For those who value photography skills on a phone, it’s worth waiting for the first tests and deciding to read them. 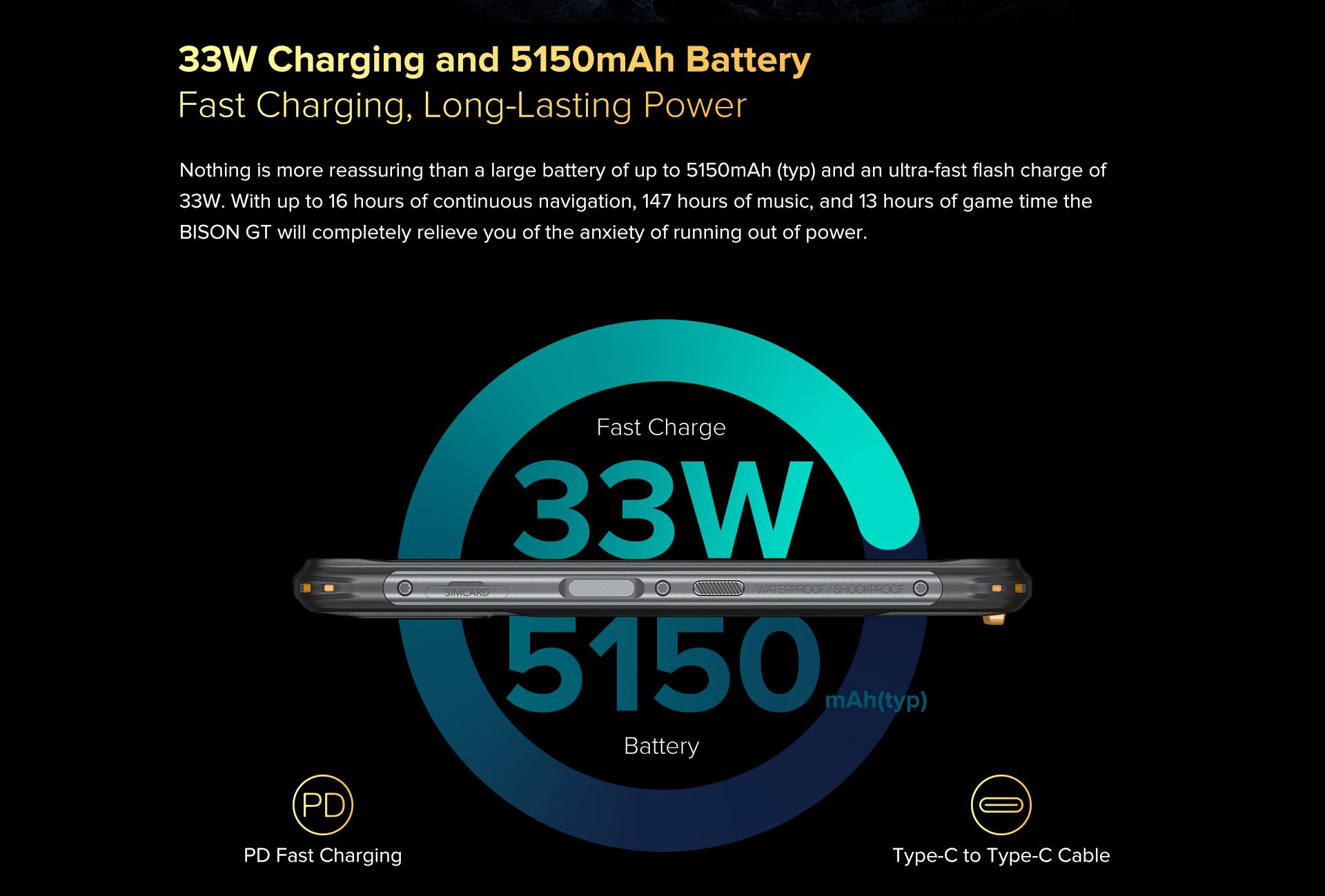 The external properties have not changed, so it has IP68 and IP69K standards, i.e. water, dust and shock resistant under certain conditions. The size of the battery under the back cover, if only a little, has increased. The 5150 mAh power source is estimated by the manufacturer to be nearly 16 hours of navigation, 13 hours of gaming, or 147 hours of music listening. Another positive is that the device supports PD fast charging technology via its Type-C connector up to 33 W.

Like its Bison GT predecessor, it got a multilanguage Android 10 system that will probably stay as long as we use the phone. Also worth mentioning are the customizable physical buttons on the side of the device, the side fingerprint reader, the built-in FM radio antenna, NFC support and the Jack connector.

The Umidigi Bison GT still performs very well on paper, and if we add the coupon price of just $239.99, the overall picture is definitely positive. With similar knowledge, at such a low price, there is currently little other alternative in the market for rugged phones. Ulefone, Blackview’s more knowledgeable products unfortunately start at over $300, and while we can find much cheaper solutions, they lag far behind the Bison GT in terms of knowledge.

And finally, when it comes to a rugged phone, you can’t miss the resistance test of the standard video, the Umidigi Bison GT: