UMiDigi Power is available for just $139.99 in Banggood promotion 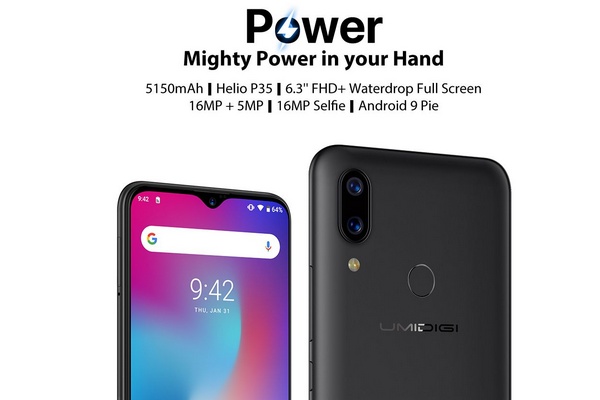 The Bangood Webshop launched its latest promotion on April 29, 2019, where it was possible to place pre-orders on UMiDigi's latest UMiDigi Power mobile. In the first part of the promotion, UmiDigi Power was available for $169.99 instead of the original $ 199.99. Now the store has released another 15 percent of the price, so it is currently only available for $139.99.

The promotion is available here:

There are two versions in the webshop: a European Union and a non-EU version. They do not differ at all internally. Certificates for this device may be different and, in the case of resale, shops in the EU may only sell the EU version. The promotional price applies to both versions.

If we look at the hardware, we have very good parameters in the middle class. The front panel features a 6.3-inch FullHD + (1080 x 2340 pixel) IPS display, with only one drop-shaped part missing. The high-quality metal housing thus occupies 157 x 74.5 millimeters in our palm and weighs 190 grams.

Under the cover, we find a powerful MediaTek Helio P35 system chip made with 12nm production technology, with 8 Cortex A53 processors, up to a maximum of 2.3GHz. For the graphical tasks, the IMG PowerVR GE8320 GPU is responsible for having a sketch of 680MHz.
SoC is equipped with 4 GB of internal memory, so you can be sure that the factory Andriod 9.0 system and applications will run smoothly.

Our programs and other data can be saved in 64GB internal storage. Of course, this would be multiply easily in the form of microSD cards (up to 256 GB). There are two cameras on the backside, a 16MP main and a 5MP assistant with f / 1.8 and f / 2.2 apertures. The selfie camera is also expected to be able to capture many details thanks to the f / 2.0 16 MP imaging feature that supports face recognition. Equipped with a 5150mAh battery, one of the largest capacities found in any smartphone, and with curved edges as well ultra-thin unibody design, the UMIDIGI Power features ultra-long endurance with power optimization and easy to use in one hand. Also the 18 W Fast Charghing replenishes the massive power swiftly. According to the manufacturer's data, two of the economical system chip and the large energy source are enough for a 30-hour conversation, or for 16 hours of video, for 9 hours of play. Umidigi's new product also comes with wireless support, along with the usual Bluetooth, dual-band Wi-Fi and global 4G LTE (B20), the description also includes NFC. With that we can use Google Pay and on-vehicle payment.

You can find more information about this device and the current prices available on the UMiDigi Power datasheet: