UMiDigi A5 Pro - Good on paper

Kinatechs | 2019-06-25 23:30:55 | Source: GearVita (promoted)
UMiDigi has upgraded its entry-level devices, including the new UMiDigi A5 Pro. A device with very good paper parameters can be ordered in action for only 93,99 USD. 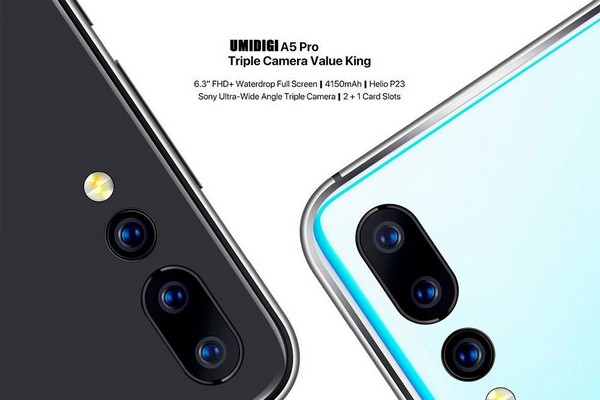 This year, UMiDigi has not missed any of its models with good value for money. The UMiDigi F1 Play with the Helio P60 competes in the lower-middle category, and the Helio P70 UMiDigi S3 Pro in the top-middle category, but it was not a cheap, entry-level model.

UMiDigi A5 Pro, which appears last month, is a true entry-level model with a wealth of features and features that will make it stand out from cheaper devices. 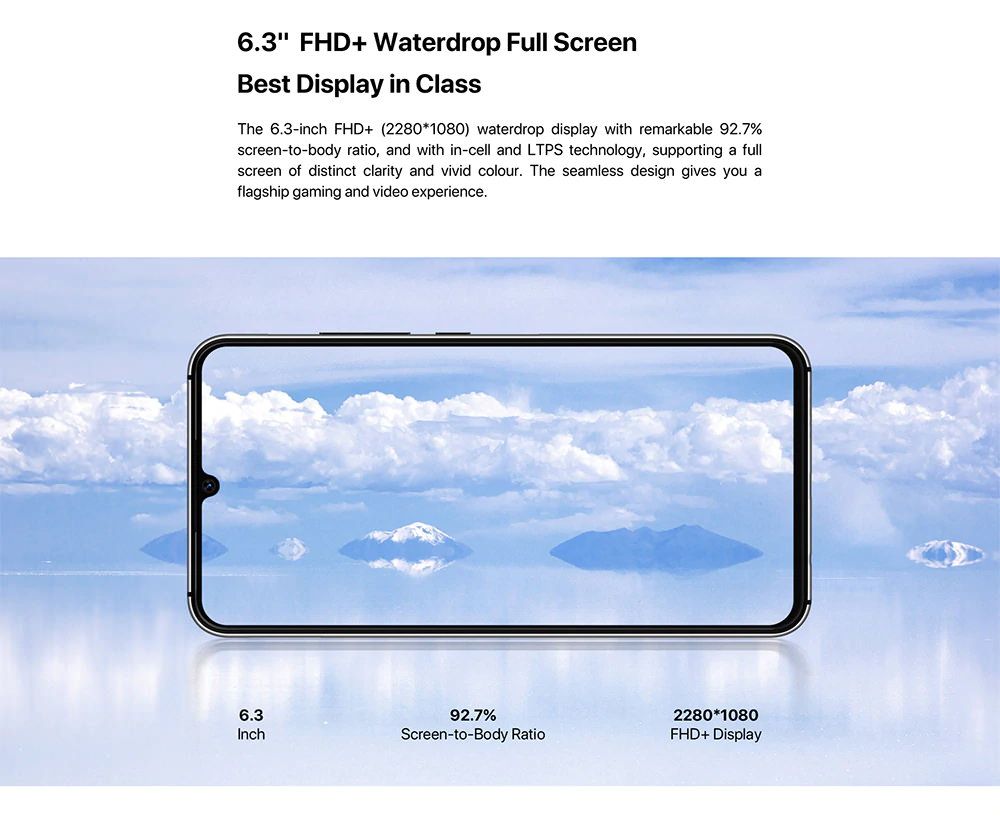 Gone is the big notch and large bezel, instead, UMIDIGI A5 Pro has a tiny waterdrop notch design with small chin, which is rare in $100 range phones. This means the phone has a beautiful 6.3-inch full screen, like the much higher price flapships. The prowess of the screen is a marvel too. It has a FHD+ (1080p) display which means it is of distinct clarity – by comparison, the Xiaomi Redmi 7 has a

The back of the phone is all glass and comes in 2 colours: Breathing Crystal and Space Grey. The Breathing Crystal version shines like the Huawei P30 Pro’s one and it looks premium. The middle frame of UMIDIGI A5 Pro is metal, which protects the phone well. 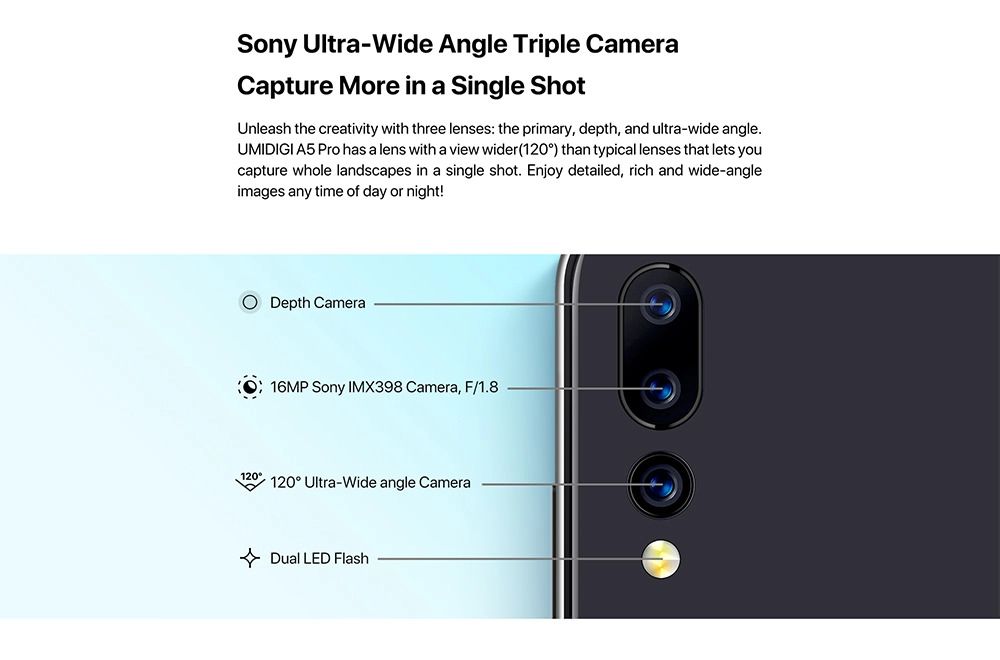 Under the back cover we find the MediaTek eight-core Helio P23 system chip, which wasn't released this year, but its performance is enough to run most applications and games. It is no wonder that you have come up with mid-range models so far.
It can also be said that UMiDigi A5 Pro is currently one of the cheapest Helio P23 mobile phones on the market.

In addition to MediaTek SoC, we find 4 GB of memory and 32 GB of storage space, which may seem small in 2019, but of course it can be expanded here with a Micro SD card, even in a non-standard way. But a little later.

Powered by octa-core processor Helio P23 with 4GB RAM, the UMIDIGI A5 Pro can run the games smoothly like PUBG. Also, it can support more than one day’s normal use, thanks to the 4150mAh big battery. The A5 Pro has a triple slot design and it can support dual 4G standby and an expandable microSD card at the same time. And the phone ships with Android 9 Pie out of the box.

There is no reason to complain about wireless support, as the A5 Pro has all the knowledge you need. Bluetooth 4.2, dual band Wi-Fi, international 4G LTE network support. Thanks to GPS, A-GPS and Glonass satellites, positioning is accurate and fast. 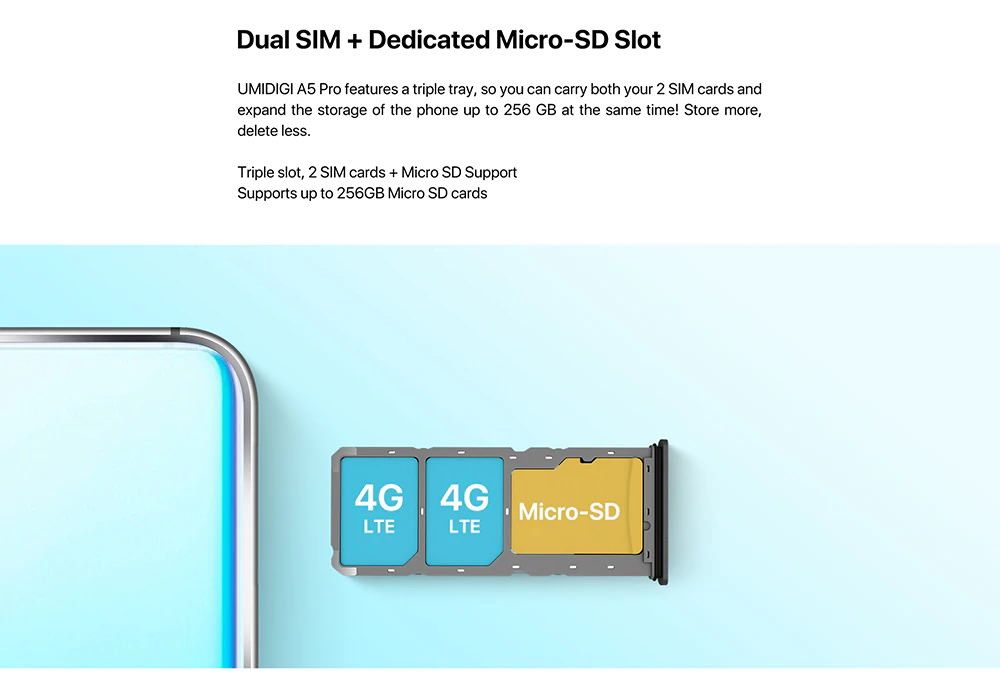 It should be highlighted separately, the system of the mobile SIM card, because when the SIM tray is pulled out, we find three card slots instead of two. This may be very good for those who use two SIM cards at the same time, but do not want to give up the possibility of expanding MicroSD storage. Unfortunately, there are currently not many models that can use three cards (2pcs SIM + MicroSD) at the same time.

The UMiDigi A5 Pro mobile phone is now available at just $ 93.99 on GearVita. What's more, there is now a choice of "Duty Free" ordering options.

You can access GearVita's action at the webshop or through the link below: