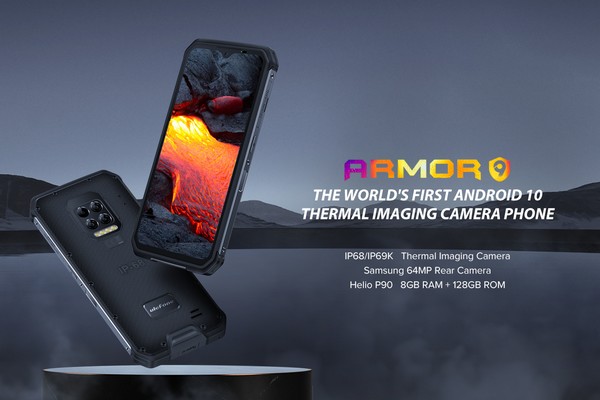 This year, Ulefone continued the world-famous Armor series with a completely new member, the Ulefone Armor 9. The previous member of the series, Ulefone Armor 7, was released last September, but its success has been unbroken ever since. Right now, at a pretty good price, for as little as $299.99, yours could be yours in Banggood’s current promotion.
Then in March of this year came the cheaper version of the top model, the Ulefone Armor 7E, which received less memory and slightly weaker cameras, but therefore also asked for less ($220).
We didn’t have to wait long for the newer, completely new numbering version, which surprisingly didn’t hit the market as Ulefone Armor 8. One of the key innovations of Ulefone Armor 9 is the FLIR Lepton thermal imaging system, also used in CAT mobile phones, which is currently a unique capability among Chinese mobiles.
The integrated FLIR thermal imaging camera with MSX technology on the Ulefone Armor 9 smartphones can detect object in the scene and create images based on temperature abnormailies, such as heat loss or gain of objects or living beings that may hiding in plain sight.
The camera can also be used to solve serious tasks such as checking the thermal insulation of homes, the efficiency of machines or the failure of electronic devices. 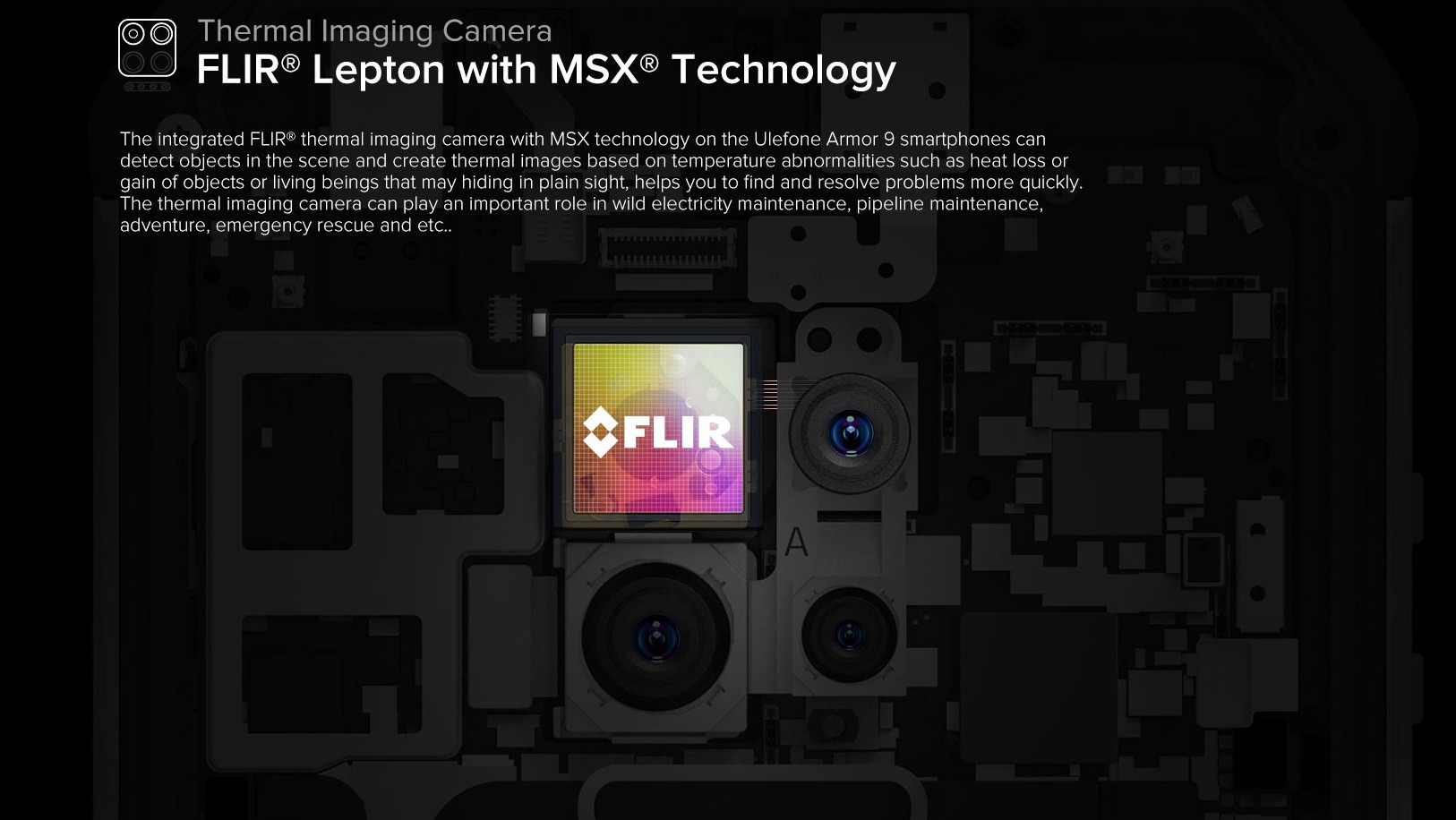 Of the cameras, it is worth mentioning the high-resolution camera, with the SAMSUNG GW1's 64-megapixel, extremely bright (f/1.7) sensor, which has already performed well in several mobile phones (such as the Xiaomi Redmi Note 8 Pro).
In addition to the thermal camera and the primary camera, we also find a 2-megapixel secondary camera and a 5-megapixel camera that is involved in capturing the contour image that appears below the thermal camera. 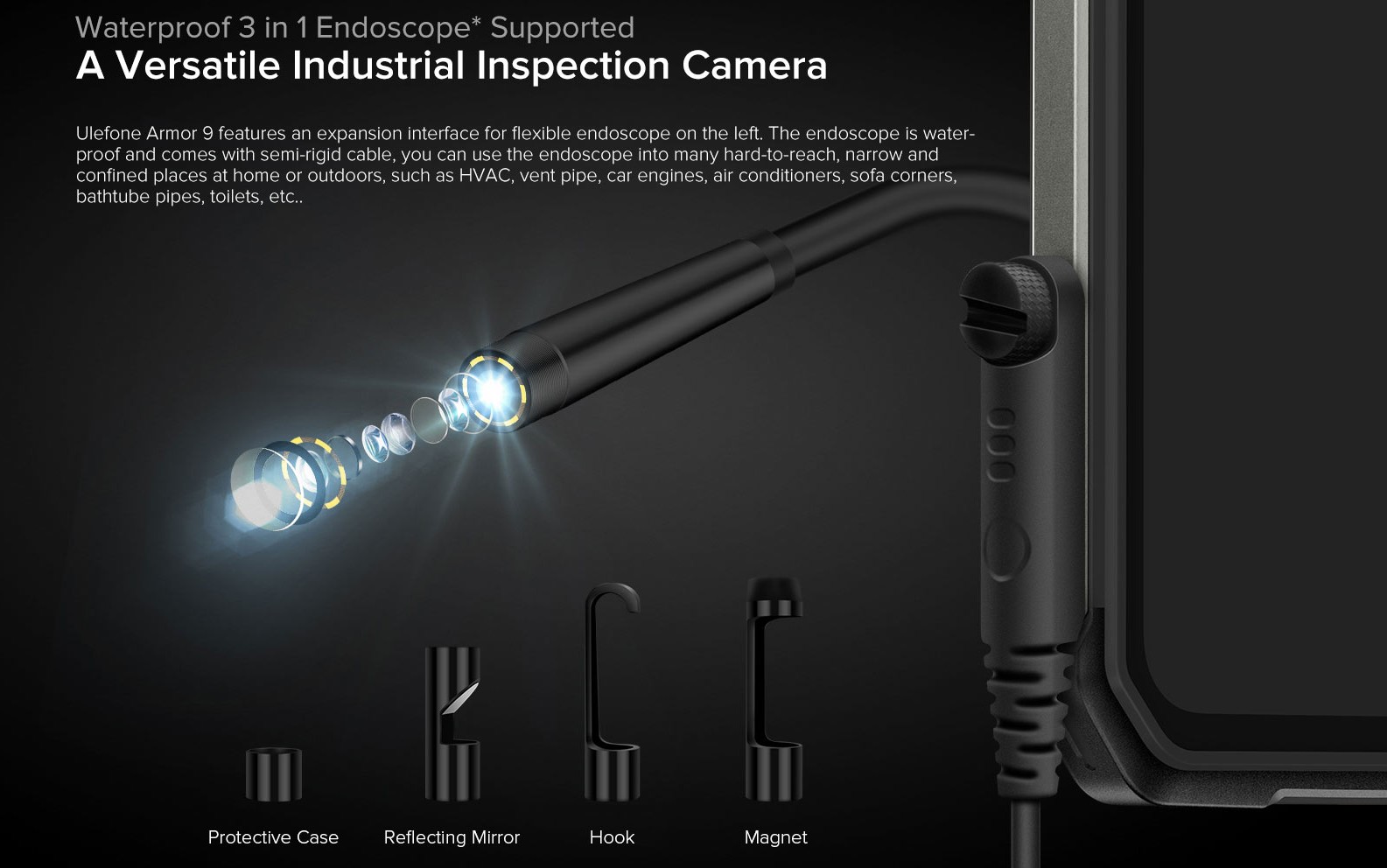 Also new is a waterproof endoscope with LED light that can be attached to the left side of the phone. With the optional camera, you can use your phone to view places you don't even have a chance to see. The highly flexible endoscope can be of excellent service in HVAC, vent pipe, air conditioners, sofa corners, battube pipes, toilets and possibly car engines, as well as in detecting faults. The camera has four recordable ends: protective case, reflecting mirror, hook and magnet.

The advanced sealing technology and solid structure mage the Armor 9 more than simply a littly splash proof. Waterproof stoppers are especially designed for the USB ports, earphone Jack, and SIM Card slot, effectively prevent water or dust entering into the phone. Components, that are exposed to the outside also have a high density macro-molecule coating for waterproofness.

Armor 9 is built by soft TPU and alluminium alloy reinforced polycarbonate material with super craftsmanship, which can provide effective buffer protection of the phone while accidentally falling down. Besides the four reincorced corners will also prevent dropping damage effectively. 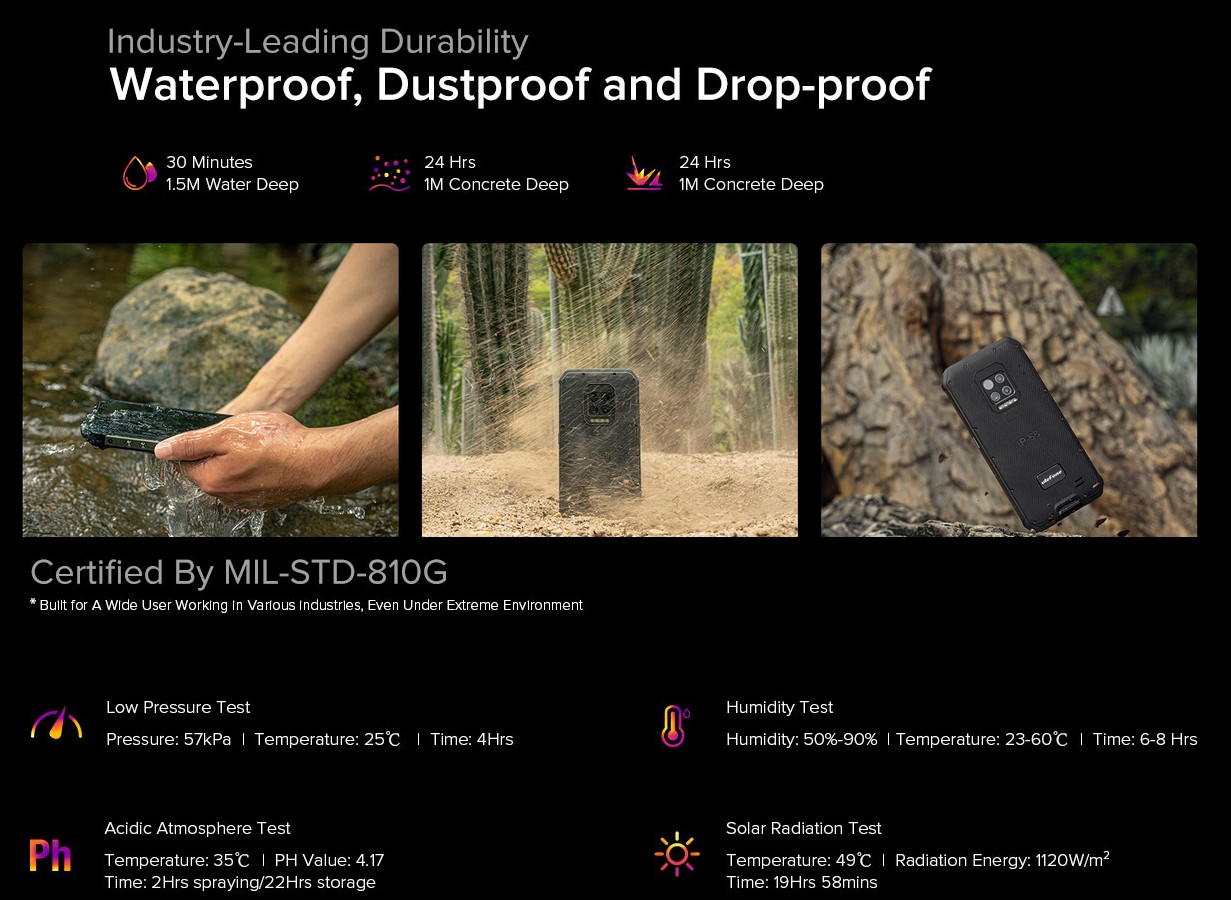 Behind the Corning Gorilla Glass 5 glass is the 6.3-inch FullHD resolution IPS display, which, despite being rugged, occupies a whole large percentage (93.9%) of the front panel.
The Armor 9 is powered by the most powerful P-series Soc from Mediatek. The eight-core MediaTek Helio P90 system chip, which is still one of the best-performing MediaTek SoCs on the market. In addition to the processors, we get 8 GB of system memory and 128 GB of expandable (max + 2TB) storage space.
Of course, long operating times are also important for a mobile phone. Progress has also been made in this regard, compared to its predecessor, the Ulefone Armor 7 and 7E mobiles. The new model comes with a 6600mAh battery that makes it easy to use for 2-3 days of use, even for more severe use. 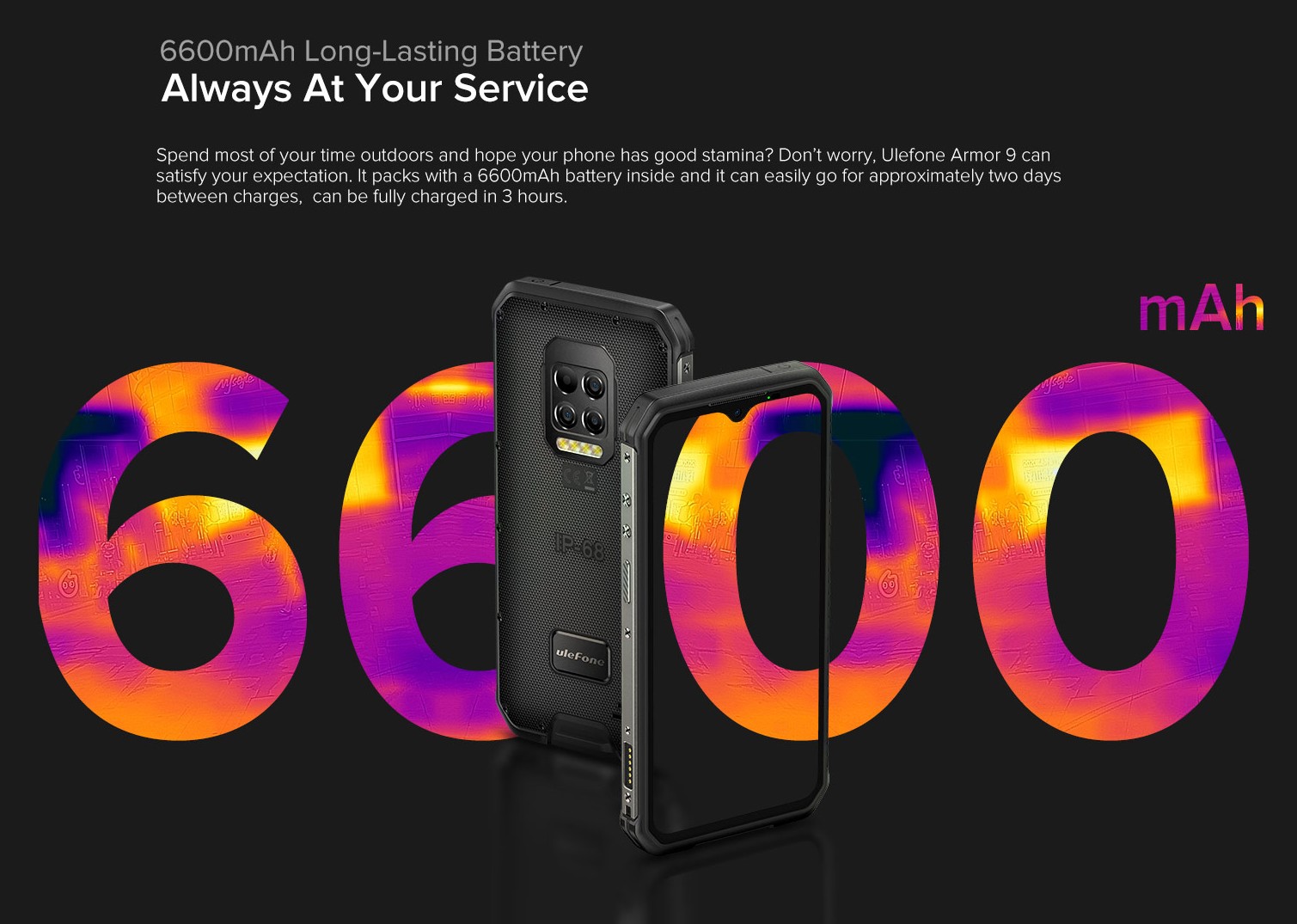 The device comes with a factory-run, multilingual Android 10 operating system and can be used anywhere in the world without any hassle thanks to global mobile network support. There is also an app toolbox on the Armor 9 which highlights a vast array of apps that you might find useful for construction, hiking or other outdoor activites: noise test, compass, flashlight, bubble level, heart rate measuring, heigh measure, magnifier, alarm, pic hanging, plumb bob, protactor, speedometer.
There are quite a few sensors in the device: G-sensor, P-sensor, L-sensor, E-compass, Gyroscope, Coulometer.

In addition, we get the already basic dual-band Wi-Fi, NFC, an accurate positioning system that communicates with several satellites (GPS, Glonass, Beidou, Galileo) and Dual 4G Dual VoLTE support. This time, the manufacturer also thought of American customers: Armor 9 adds an extra 4G Band - Band 66, that means the network support for North America making it even more appaeling.
You can purchase the Ulefone Armor 9 phone with excellent parameters and capabilities now from the Banggood store for an introductory price of $449.99. This price is valid for the first 200 orders, after which the price, depending on the number of customers, will increase continuously until it reaches the price of $499.99. The online store is expected to process pre-orders from August 15th.

You can preorder the Ulefone Amor 9 phone via this link:

Ulefone has also released a short promotional video about Armor 9, which you can watch here: