Kinatechs | 2019-11-01 20:22:10 | Source: Geekbuying (Sponsored)
Tronsmart has updated its product palette with two speakers, which can be ordered cheaper with a coupon code. The Tronsmart T6 Max has also improved in performance, quality and functionality over previous models, while the Tronsmart T6 Mini is one of the best entry-level Bluetooth speakers on the market. 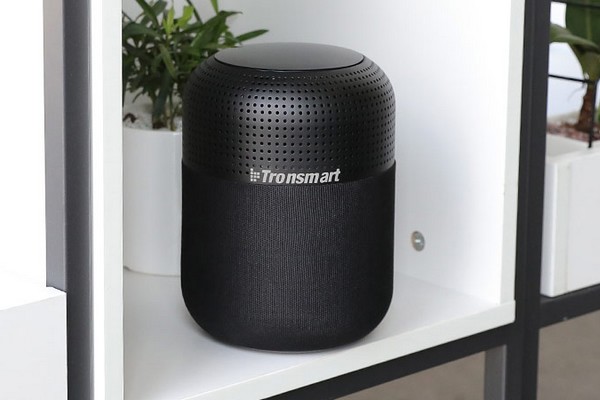 Shenzhen-based Tronsmart products have been slowly infiltrating European commerce in recent years, and nowadays we can find discounted wireless speakers in almost every technical store and online store.
Those who follow our site will surely remember the Tronsmart brand and their excellent wireless speaker product, the Tronsmart T6 Plus, promoted by Barcelona star player Luis Suarez. Now the manufacturer has come up with two new bluetooth music boxes that are also great value for money.
The Tronsmart T6 Max and T6 Mini are two different products, while the T6 Max promises great sound and powerful bass at a reasonable price, while the T6 Mini is more focused on the entry level.

The T6 Max's appearance is extremely clean, modern, so it can be used anywhere, can be placed, and looks good in almost any environment. The enclosure is IP5x protected so you can use it even in light rain.
The speaker itself is cylindrical and extremely large and heavy compared to a portable speaker. With a weight of almost two kilograms and a size of 14 x 14 x 19 centimeters, we will certainly not cut it in our pockets or carry it in our purse. The T6 Max is much more than a simple, portable little noise maker.
Among the Tronsmart products, the T6 Max is the "strongest" with nearly 60 watts of power, and the cylindrical design delivers 360 degrees to the outside. Unmatched rich and clear sound for its compact size. It combines Tronsmart patented SoundPulse™ audio technology and custom speaker drivers to evenly spread a max of 60W output with the balanced, detailed and wide-range sound to every corner of the room. 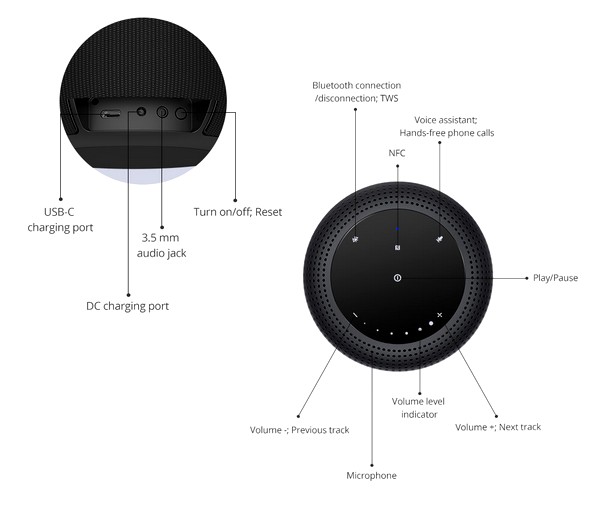 The touch sensitive control buttons are on the top of the speaker while the external connectors are on the bottom of the device. Use the buttons to start, pause and skip music tracks, or to adjust the current volume. The upper surface also shows the Bluetooth and NFC connection indicator light and the current volume settings.
The huge 12000mAh battery inside the device can be charged via USB Type-C port or DC port. It takes about 6 hours to fully charge, which gives you nearly 20 hours of listening time (50% performance).

Inside the speaker, along with 4 subwoofers and 1 subwoofer, a combination of 8 passive radiators delivers 60 watts of music performance, which is uncommon in this price range.
The custom-designed array of 8 passive radiators delivers monstrous sound along with the hardest hitting bass that you will not only hear but also feel it, even in a low level of volume. Engineered with the exclusive SoundPulse™ technology to ensure every beat of bass more intense, more detailed, and more define.

The features of the T6 Max are also outstanding: in addition to traditional Bluetooth connectivity, you can also use NFC to share your music. So instead of all the pairing mysteries, you just have to put your phone next to the speaker and playback starts.
TWS, True Wireless Stereo support, is also available, so if you have two T6 Maxs in your hand, you can use them together as a stereo speaker. Placed next to the TV in your home, the two 360-degree speakers can give you a unique cinema experience.

The Tronsmart Element T6 Max is available now at GeekBuying Coupon Offer for an introductory price of only $92.97. The coupon code for this purchase is GKB10PP, which gives you a $ 10 rebate over a $ 100 purchase. Since the product is less than $99.99 for a hundred dollars, it is necessary to add $2.98 "Shipping Insurance".
The promotion is available on GeekBuying or via the following link: 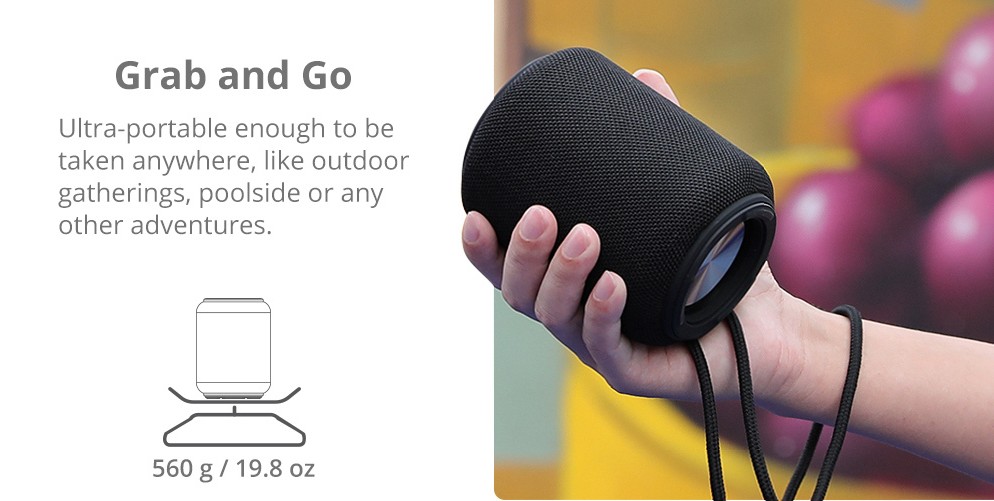 The Tronsmart Element T6 Mini, by its name, is much smaller than the aforementioned wireless speaker, weighing just 560 grams. Due to its size, of course, the new Mini is capable of much lower performance, but we haven't found the exact face value on the manufacturer's website. Which is sure to be similar in design to the T6 Max, with 360-degree surround sound, Bluetooth 5.0 connectivity, and TWS support.

The size of the battery here is only 2500mAh, but due to its lower performance it does not show up in playback time. Normal music playback time is 24 hours and phone call time is 20 hours at 50% volume.
The Tronsmart Element T6 Mini in GeekBuying introductory action is only $19.99 and you can get the offer here: 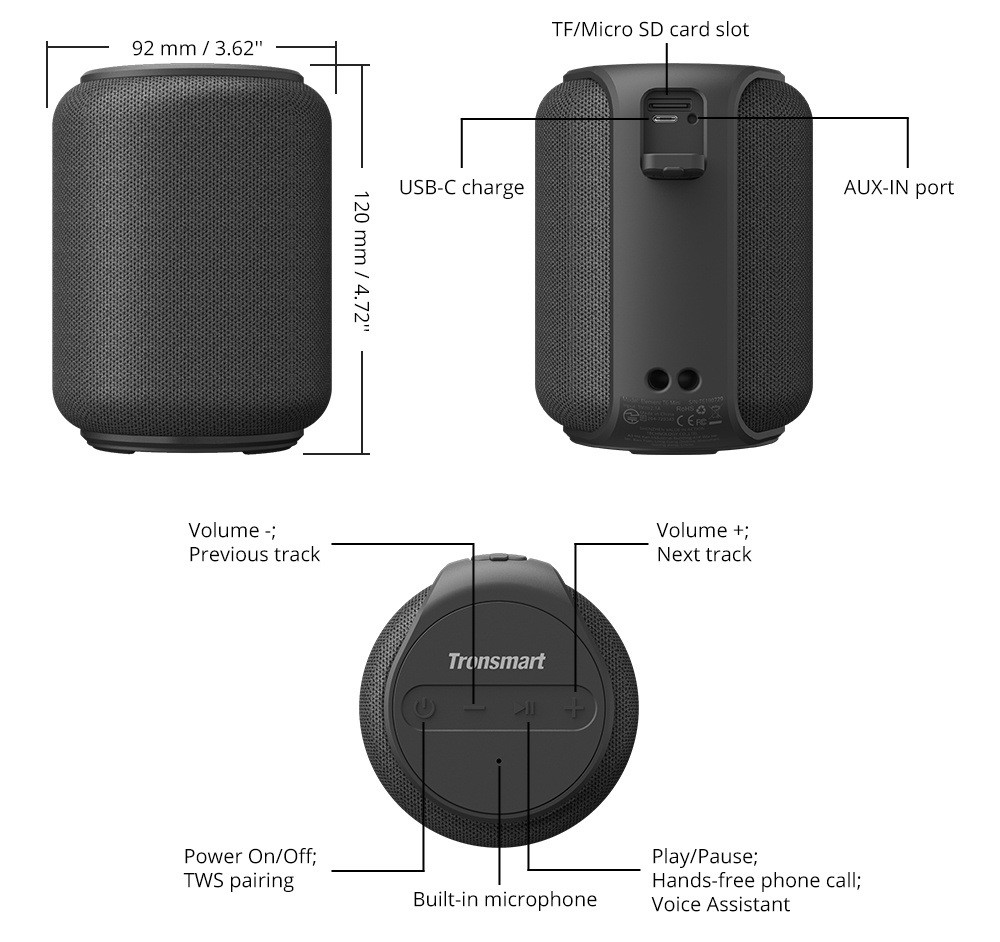