Kinatechs | 2020-06-10 11:19:05 | Source: Tronsmart
For a brief test, we had Tronsmart’s entry-level wireless speaker, the Tronsmart Element T2 Plus, which can be said to be one of the most equipped products currently on the market for under $30.

We’ve written on our site before with Tronsmart products: at the end of last year, the high-performance Tronsmart Element T6 Max was introduced, preceded by the T6 Plus promoted by Luis Suarez. Tronsmart was even a lesser-known name at home at the time, but in the last few months, the manufacturer’s wireless speakers have appeared in more and more domestic electronics stores. 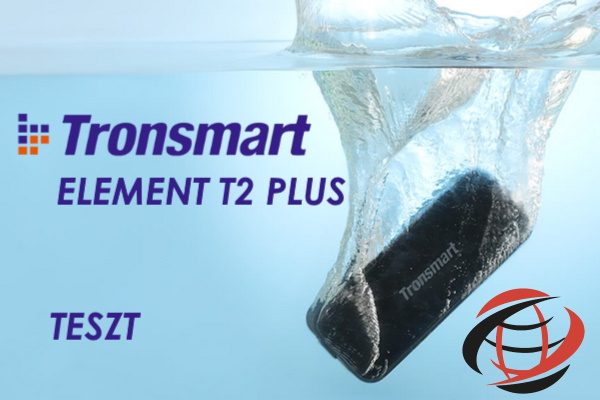 In our presentation today, one of the smallest models, the Tronsmart Element T2 Plus, comes to the fore, which is a slightly improved version of one of last year’s successful products, the Tronsmart Element T2. The 20W, waterproof, NFC-capable T2 Plus with above-average operating time is available in many locations.
Of course, there are plenty of options for quick purchases from abroad: the cheapest way to get Tronsmart's latest music box is from the GeekBuying store or even from European stock.
The $27.99 price is a very good offer for:


Tronsmart Element T2 Plus
EU Warehouse with Free Shipping
Price: 27.99 USD
Our site procured the product from an EU warehouse and, despite the epidemic situation, arrived very quickly, within about a week. The box, which came in a white-purple color combination, was thankfully durable, so it tolerated the longer trip well until it reached us. 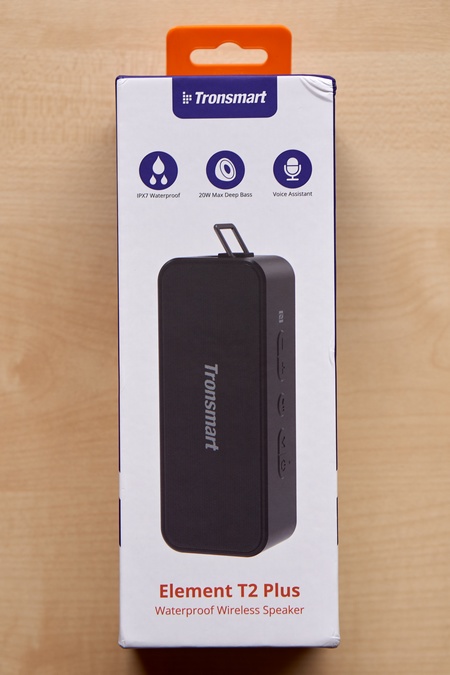 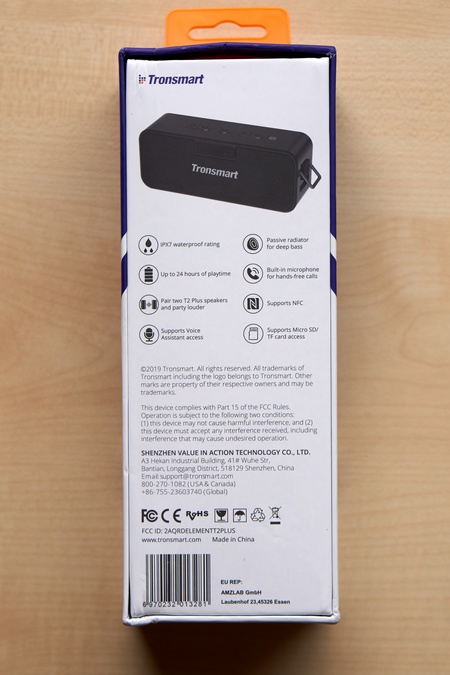 Unpacking the box, we find the speaker itself in a thin, transparent bag, which, when highlighted, immediately makes it feel that the manufacturer has not saved material usage. In a purple little box you will find the included connectors and accessories: an English user manual, a short 3.5mm connector and a USB Type-C charging cable, as well as a short little cord that can be attached to the side of the device. 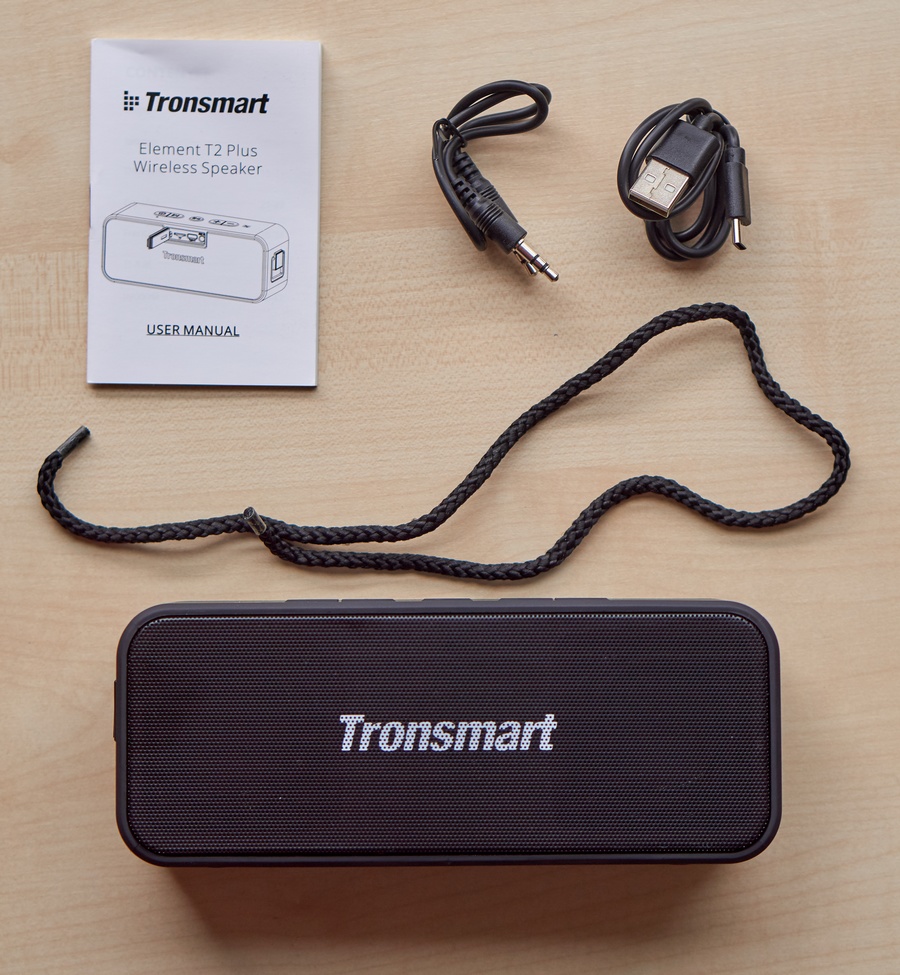 The speaker is much larger compared to entry-level products, but with its 175x65x62 millimeters it still fits in your hand. Thanks to its weight of 470 grams, we can easily take it with us.
The whole box looks extremely high quality, it can’t be squeezed, it doesn’t dent in anywhere, it looks like the manufacturer has paid attention to the use of the material. You really can't complain about that.
If we look at the small box from the front, we only see the scattered Tronsmart inscription, and if we look behind the filter grille, we can also see the two 10-watt speakers each. 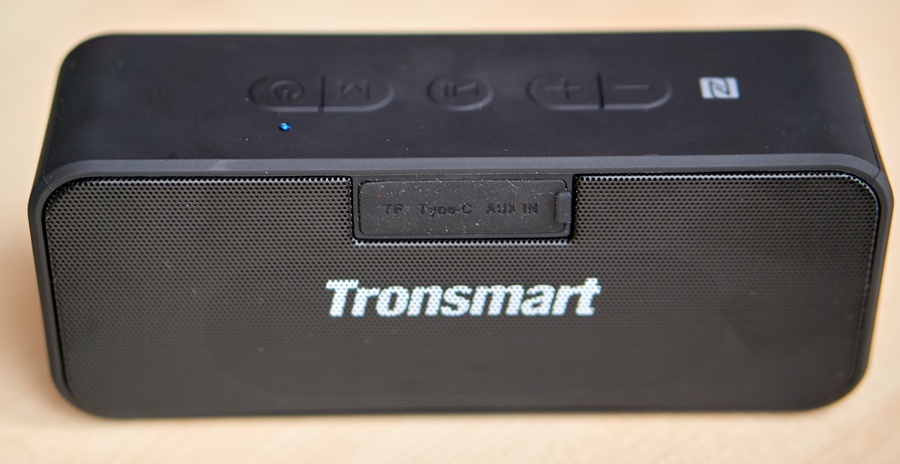 If we turn one all the way through, we are greeted by almost the same visual world at the back. Anyone who, on the other hand, observes the two images well and starts looking for the differences will soon find the connectors: the memory card slot, the USB Type-C connector, and the line input. Of course, due to the water resistance, the connectors are protected from moisture by a rubberized tab.

It also follows that it is not very practical to use the Tronsmart Element T2 Plus in a wet environment with a jack connecting cable. On the other hand, with a Micro SD card or Bluetooth, you can safely listen to your favorite music right in the middle of a pool party, thanks to IPX7 protection. Using the MicroSD card, Wav, Flac, Mp3 and Ape formats are recognized by the device's internal controller.

At the top you can find the five control buttons that you can use to adjust the volume, you can switch between the numbers. The buttons, from left to right, are as follows:
1. Power button: Press and hold for 3 seconds to turn on, then pair with any Bluetooth-enabled device. A blinking blue light indicates that your device is ready to connect, a solid blue light, and a beep when the connection has been established.
If no device is connected, the device switches off automatically within 10 minutes.
If you may have two Tronsmart Element T2 Plus speakers on hand, you have the option to connect them (TWS). All you have to do is turn on both devices. The two units will automatically find each other.
If this does not happen, press the button marked M for 3 seconds on one half of the pair. The connection is permanently indicated on one T2 Plus and a flashing blue light on the other. We can connect our phone, tablet, etc. to the latter.
There is an additional function for the power button: if you press it for just one second, the voice assistant on your phone (or other device) (Google, Siri, Cortana) will be activated, and you can also give instructions using the built-in microphone.
2. I have already mentioned the button marked M (mode selector). To cancel TWS mode, this button must also be pressed for 3 seconds.
3. Media control button:
4 and 5. Volume control or long press to switch between tracks

The greatest virtue of the Tronsmart Element T2 Plus lies in its price and knowledge combined. Inside the box is a pair of very high quality 2x10 Watt speakers, complete with an elongated passive diaphragm at the back.
Speaking the speakers for the first time, we may be very pleasantly disappointed, as it is a disgraceful performance with a surprisingly good sound world, noticeably strong depths, and clear treble. By raising the volume a little, we can listen to the music on it for a long time without distortion. Switching to the highest volume, which almost disturbs our neighbors, we can still feel a little distortion, but compared to its size, the tiny little sound box plays outstandingly well.
I used to be lucky enough to try more portable speakers in this price range (JBL, Xiaomi), but so far I liked it the best.
If so many positives weren’t enough, let’s talk about uptime, which we admit, a portable speaker can indeed be a serious factor in a purchase. The T2 Plus has a fairly large 3600mAh battery, so you can enjoy up to a full day of music (at 50% volume) on a single charge.
The Tronsmart T2 Plus is recommended for anyone who wants an affordable quality portable speaker but doesn’t want to spend tens of thousands on it. Tronsmart’s new product is a great sequel to the basic T2, and I can definitely recommend it in terms of value for money.
Among the foreign web stores, the official distributor of Tronsmart products is the GeekBuying store, where you can find almost everything in European stock. The Tronsmart Element T2 Plus currently costs around $28 with free shipping. If you want a more powerful speaker, you might want to check out Tronsmart’s products at GeekBuying.