Redmi Note 9S - The new king of the mid-range smartphones

Kinatechs | 2020-04-12 20:00:23 | Source: GearBest (sponsored)
Just two weeks ago, Redmi Note 9 Pro’s device for the international market, the Redmi Note 9S, was already available in the most popular online stores. Now in most stores you can now get an even more affordable mid-range phone at a coupon price. 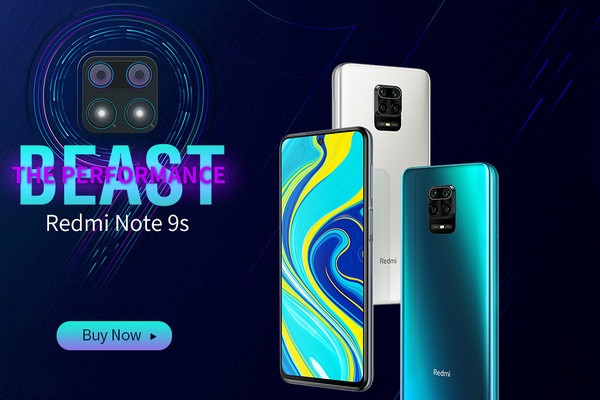 The successor to the Redmi Note 8 Pro, introduced in September last year and popular worldwide to this day, has arrived and could bring a bit of champagne to the mid-range.

The Redmi Note 9S for the European market, which is practically a one-in-one Redmi Note 9 Pro, is now available at a very good price from several online stores.
The Redmi Note 9S, which comes with international 4G support and a multilingual operating system, is now the cheapest available at the GearBest store, starting at $209. This price is for the 4GB/64GB model after entering the appropriate coupon code. We don’t have to put much more on the table for the 6GB/128GB version either, for $239 it could already be ours.

You can access the promotions in the GearBest store:

If you visit the Xiaomi Redmi Note 9S datasheet on our site, you can also find offers from other foreign stores, and even Edwaybuy can deliver from stock in Poland not much more expensive, with a much shorter delivery time.

Many may have noticed that the promotions on Xiaomi mobiles marked recently have not been valid for Germany, France, Italy and Spain. This is because in these countries, Xiaomi mobiles can only be sold at the official European price, so no other foreign online store can sell them cheaper.

At the official presentation at the end of March, marketers listed 9 outstanding features that characterize this year’s Redmi Note series. Let's look at these in turn.

The Redmi Note 9S is the first Redmi model to receive a display with a dot cutout. The 6.67-inch FullHD+ (1080x2040) resolution IPS panel fills almost the entire front panel (91%), with only a tiny hole in the top where the front panel camera is located. The 20:9 aspect ratio of the display itself is different from the average, making the new Redmi Note series longer but narrower.
Other features include a 1:1500 contrast ratio, 450 nit white brightness, the HDR10 standard and TÜV Rheinland's low blue light certification to protect our eyes.

The second highlight of the device is its looks. The Redmi Note 9S is not just from the front, the back cover is changing. After the Redmi Note 8, the back cover has been completely redesigned: the cameras have been moved to the middle, in a 2x2 distribution, thanks to which the symmetry prevails perfectly. The back cover, like the front cover, is covered with 3D Gorilla Glass 5 glass, under which there is a 20-step colored gray (Interstaller Gray), blue (Aurora Blue) or white (Glacier White) cover.

The next excellent part of the mobile is the Snapdragon 720G system chip hidden under the back cover, in which the G mark refers to gamers. Manufactured with 8nm technology, the Qualcomm SoC contains eight cores capable of operating at up to 2.3GHz. With fifth generation AI engine with boosted AI computing performance. Compared to the previous generation, a performance increase of nearly 15 percent can be expected. Measured in points: Redmi Note 9S scored about 280,000 points in the popular Antutu Benchmark program.
The presentation compared the graphics performance of the Note 9S with the Samsung A51 mobile, in which the new Redmi model achieved nearly 90% better graphics. 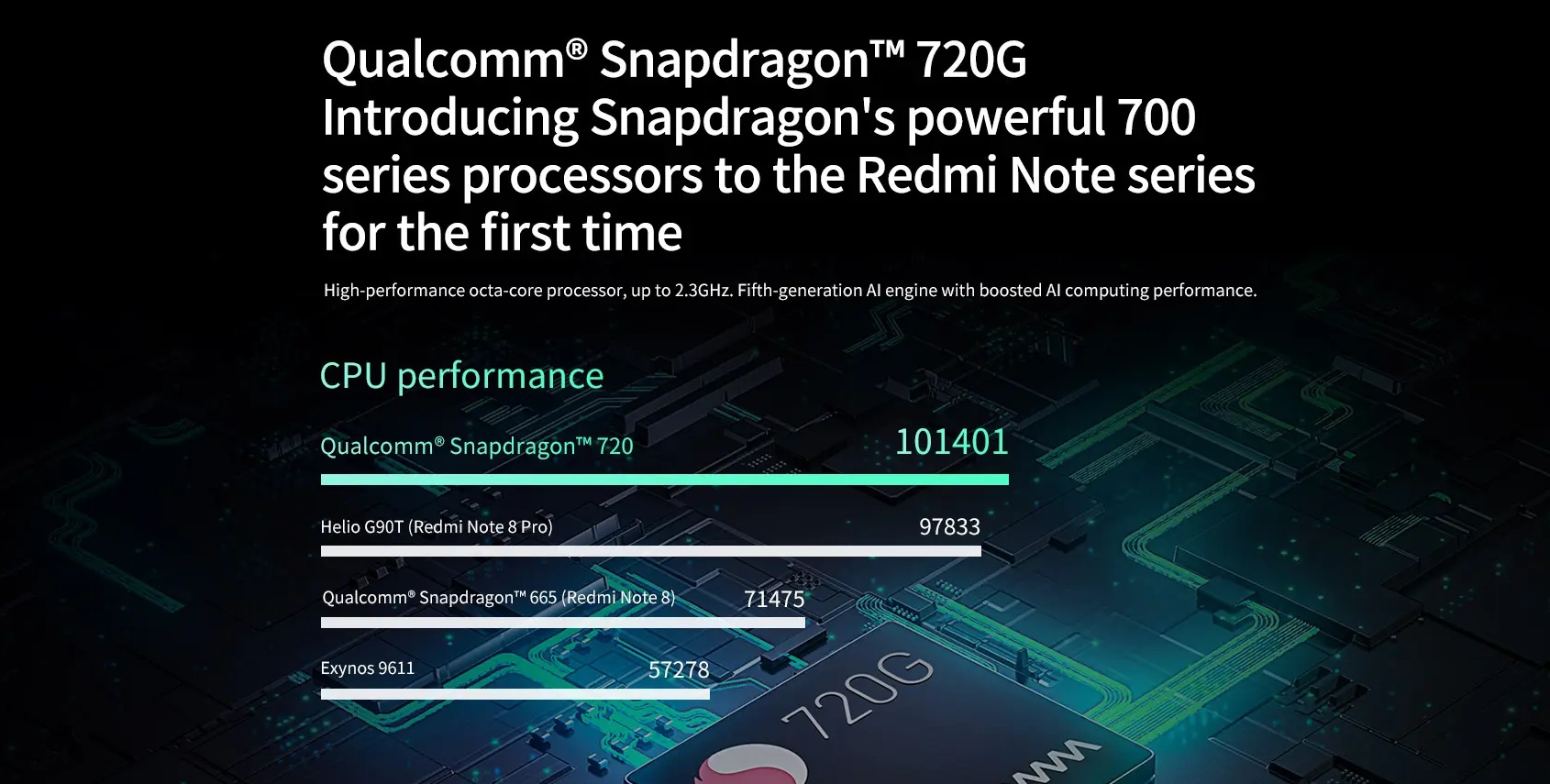 The Redmi Note 9S is available in two versions, the cheaper model has 4 GB of memory and 64 GB of internal storage (UFS 2.1), but for a little more you can get the 6 GB/128 GB version. Of course, the storage can be expanded in the form of a MicroSD card (max. 512GB). In addition, the good news is that we can find three slots for the Note 9S: by pulling out the card tray, we have 2 Nano SIMs and a separate MicroSD slot.

Fourth, excellent uptime can be highlighted in the new Redmi series. The 4500mAh battery found in last year's Redmi Note 8 Pro phone wasn't short, but thanks to this year's 5020mAh power source, we can expect even longer usage time. The larger size is not visible at all from the outside, as the 8.8 millimeter thickness of the mobile has not changed compared to its predecessor.
Whether you are travelling, commutin or running errand, a long lasting battery is must. With this ultra-high capacity battery, you can browse your phone for hours on end without having worry about running out of power. 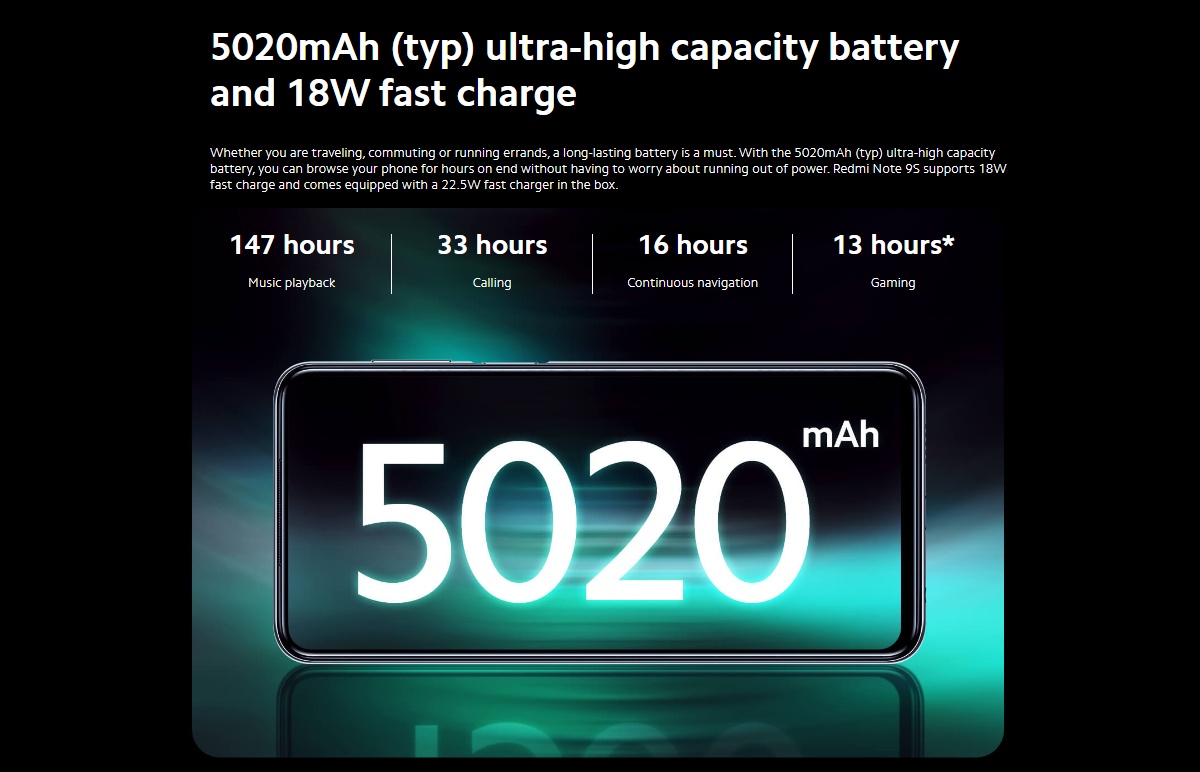 The device supports fast charging, so you can charge the large battery with up to 18 W of power with the included 22.5 W adapter. A more powerful charger would have been expected here, but it may not be supported by the system.

The manufacturer also promises a quality improvement in photography in the new series. To do this, you placed 4 rear-panel cameras in the center of the rear panel: a 48 MP f/1.79 main unit, an 8 MP ultra-wide angle (f/2.2), and a 5 MP macro camera (2 cm to 10 cm) or a 2 MP depth sensor. Thanks to the high-brightness primary camera, we can take acceptable images in the evening, even by hand.
The front panel features a 16-megapixel self-timer camera, supported by software artificial intelligence.

The 48 MP ultra-high resolution main camera captre the magnificent, with 8000x6000 pixel ultra-high resolution, night mode for sharper photos with exquisite detail. The 8MP ultra wide-angle camera embrace a bigger world, it provides an almots 1.3 times wider view, and increases the field of vision from 79° to 119°. And also it supports distortion correction.

The 2MP depth sensor capture your beuty, thanks to AI portrait mode with background blur adjustment. You can capture portraits like a movie director with a movie mode.

With the new 5MP macro camera you can discover the microworld. With 2 cm minimum distance close-up you can explore the wonders of the details. 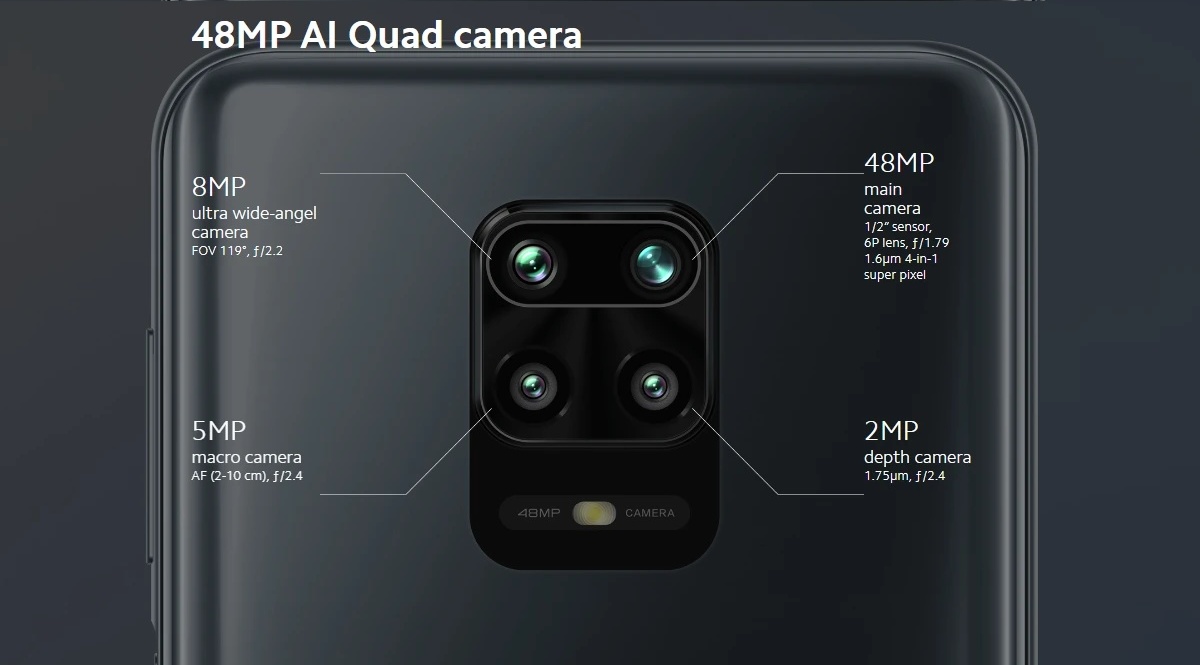 You can record videos in a maximum resolution of 4K at a speed of 30 frames per second, we also have the option of shooting in slow motion, with a resolution of 120fps in FullHD resolution and 960 fps in HD resolution. Optical image stabilization is not expected in this price range, but electrical stabilization (EIS) works very well thanks to the large sensor. An exception to this is 4K video recording, where EIS is not available either.

The fingerprint reader integrated in the display is not yet typical in the middle category, most mobile phones have this type of sensor on the back. The Redmi Note 9S chose a different solution: the fingerprint sensor was placed on the power button, which makes it much faster and easier to unlock the system. This is not an innovation in the Redmi series, as we have already seen the same solution in the Redmi K30. 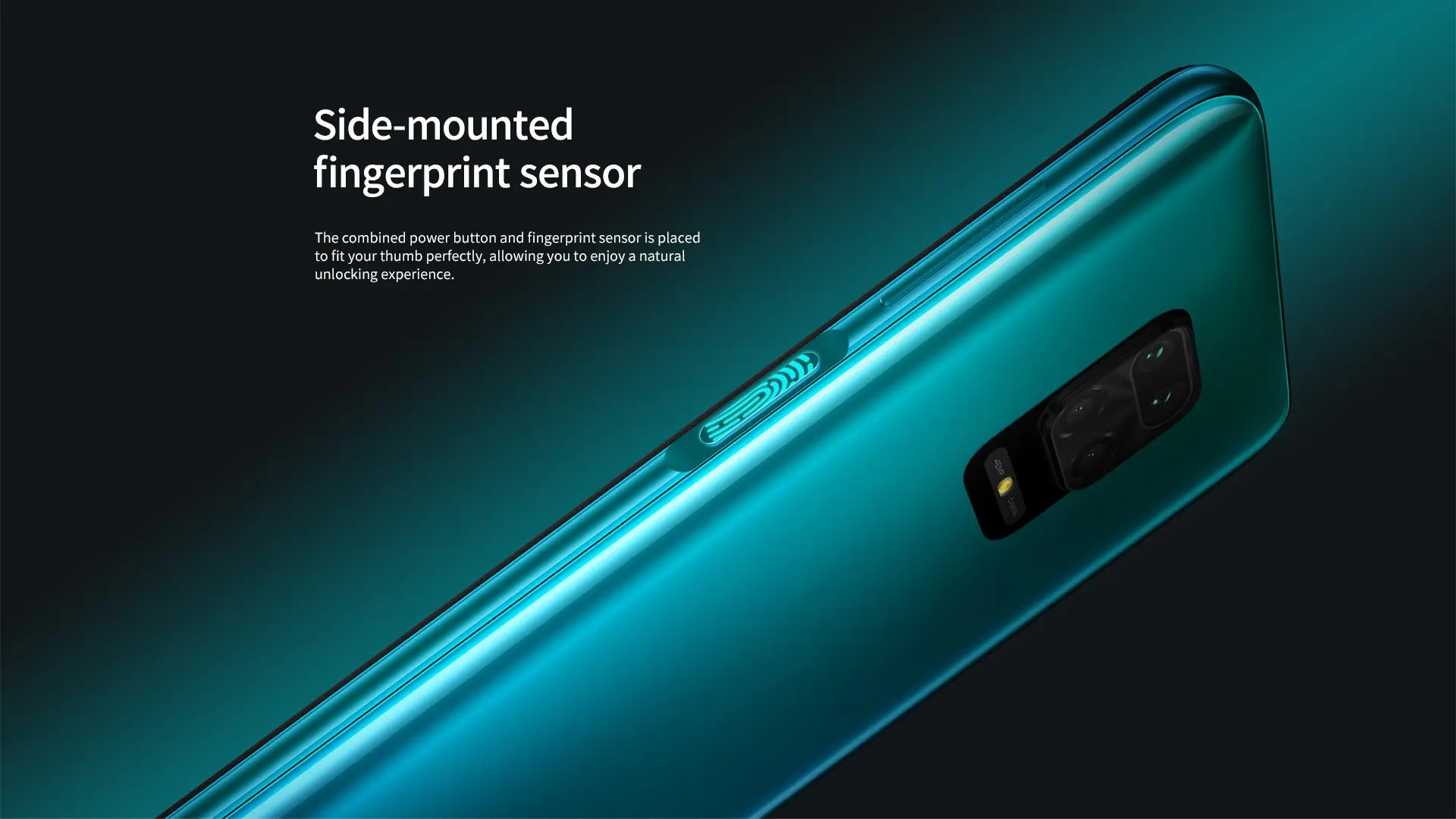 The phone's audio system has improved a lot compared to its predecessor. Because the Note 9S is primarily focused on gaming and filming, the speaker in the device has become nearly 30 percent louder and can deliver much stronger bass (80%).

A special point in the presentation was the device features that were already found in the Redmi models. These include the infrared sensor, the 3.5mm Jack connector and the Type-C connector.
The last point goes back a bit to the already mentioned exterior look, complemented by Corning Gorilla Glass 5 protection and a splash protection rarely seen in the Redmi series.

All in all, Redmi has once again launched an excellent value-for-money device on the market, and fortunately the pencil hasn’t caught on to the price of new models either. If we compare it with the prices of its predecessor, Redmi Note 8 Pro and the newly released Xiaomi Redmi Note 9S, we can’t see almost any difference, which is good news.

You can get the 4GB/64GB Redmi Note 9S for as little as $209 by adding the appropriate coupon code to your orders on the cart page. Anyone looking for more storage will have to pay exactly $30 more, for a total of $239.

You can access the promotions in the GearBest store: 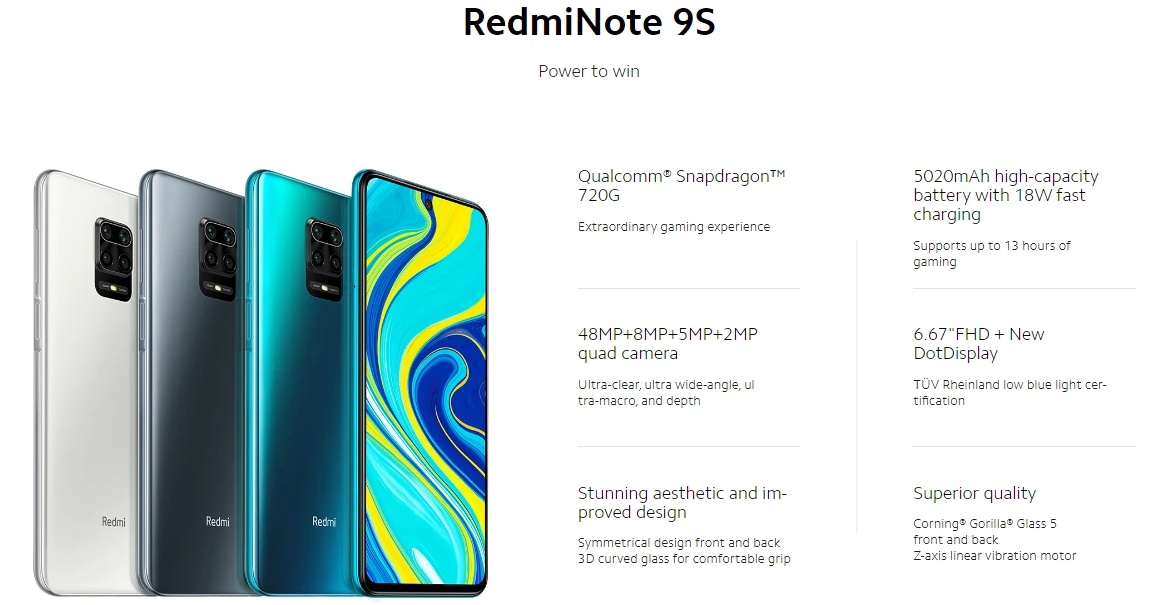