Kinatechs | 2021-03-25 16:29:52 | Source: Goboo.com
With the Snapdragon 860 and 120Hz display, the latest POCO mobile, the POCO X3 Pro, has arrived, which could be a worthy successor to the POCO X3 phone, which is also popular in Europe. Plus, anyone who orders now can pocket additional discounts.

After POCO’s official press conference this afternoon, it doesn’t dare say that the POCO X3 Pro, which comes with an updated Qualcomm processor, plenty of memory, and fast-speed storage, could be the new king of the middle class.

Thanks to the Goboo webshop, which is one of the official Xiaomi distributors in Spain, anyone can place their order for the excellent mobile phone now. The store opened recently, so it’s not so well known, but after the last Redmi Note 10 promotion, from which several of you have ordered, it can definitely be said to be reliable. The packages will be delivered to the store within 24 hours as soon as a phone is available and will arrive in any EU country within a few working days. And since it comes from a European country, we won’t have any additional costs with it.

All Goboo products, including the POCO X3 Pro phone, come with a 2-year official warranty, plus a free Mi Watch smartphone or Mi Air 2 SE wireless headset, and a 6-month break break guarantee for the display (for the first 500 customers). It is definitely positive that in case of failure, there is no need to worry about returning to China, in the case of Spain, parcel delivery can be arranged quickly and cheaply.

On the POCO X3 Pro promotion page, you can even play a quick game where you can win coupons, a smart watch (Mi Watch Lite), a projector (Mi Smart Compact Projector), a fitness bracelet (Mi Band 5) and other useful accessories.

There are plenty of secure payment methods to choose from in the Goboo store, including Paypal.

You can access the promotion on the store page here:

The latest mobile phone from the POCO brand under the auspices of Xiaomi was launched as a follow-up to an improved version of the POCO X3 released last September. Externally, we can hardly see any change, the bigger differences can be found in the hardware.

So on the front panel, here too, we find a 6.67-inch FullHD + (1080x2400 pixels) resolution 120Hz LCD IPS display with 240Hz touch detection. A small but not very significant difference is that the screen in the new model is already protected by Corning Gorilla Glass 6 from various external damages. If you already have protection, it is important to mention that the POCO X3 Pro has also received IP53 protection, which means that small splashes of water cannot damage the phone.

Externally, we will not find any further differences, so the size (165.3x76.8x9.4 millimeters) and weight (215 grams) remain, but even the lens distribution distributed in an X-shape on the back. 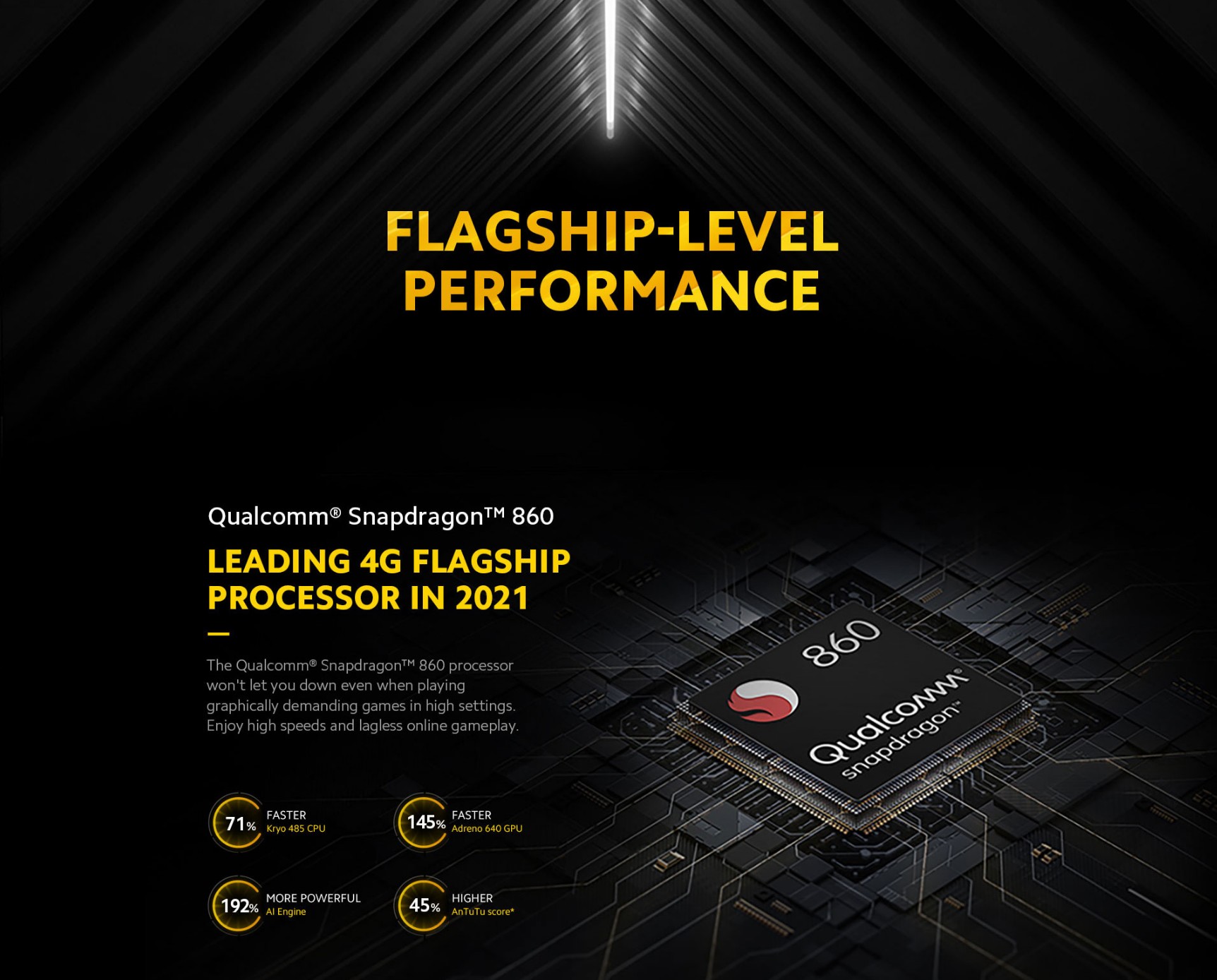 If we look under the back cover, we will find plenty of differences that will definitely set the standard in favor of the new model. The biggest novelty in the Pro version is the eight-core Snapdragon 870 system chip supplied by Qualcomm with 7-nanometer manufacturing technology, which is capable of speeds of up to 2.96 GHz thanks to the Kryo 485 processors. With the support of the Adreno 640 GPU, we will also be able to see progress in the field of games compared to its predecessor.

The POCO X3 Pro is available in two versions, one 6GB/128GB and 8GB/256GB, the memory is LPDDR4X, while the storage is UFS 3.1, which has so far only been seen in the high-end mobiles of the Xiaomi Group (e.g. Mi 11 , Mi 10T). The latter can also be seen as an improvement over its predecessor's UFS 2.1 storage.

Of course, the hardware speed also means higher heat dissipation, fortunately the manufacturer also thought of this: the heat dissipation was solved with a special liquid cooling (Liquid Cool Technology 1.0), thanks to which the temperature data can be improved by 6 degrees.

If we look at the cameras, we can see a small negative change here, although I would note that very few will notice this in everyday use. The new version is replaced by a 48 MP sensor with an aperture of f/1.8, also based on quad-Bayer technology (Sony IMX582), instead of the basic 64 MP camera, which means that the image resolution will normally be 12 MP .
Next to the main unit are 8 MP ultra-wide-angle, 2 MP macro and also 2 MP depth-sensing cameras. We can still capture our selfie images at 20 MP resolution.

Among the already known camera modes, you will find extras such as dual video mode and dual (clone) mode, with which you can capture even more unique, special videos.

The long-lasting 5160 mAh battery was not changed by the engineers either. The 33 W fast charging option has also been retained, with the help of which, according to the manufacturer's data, we can charge our mobile phone to 59% in half an hour and 100% in 59 minutes.

Among the wireless technologies we can find dual-band ac WiFi, 5.0 Bluetooth, NFC, without which the usual infrared unit could not be missed. For the players, the manufacturer favored a much stronger-than-average Z-axis oscillating motor.
The fingerprint reader is located on the edge of the display, and the 3.5 mm jack connector and the stereo speaker pair can be mentioned as separate positives. 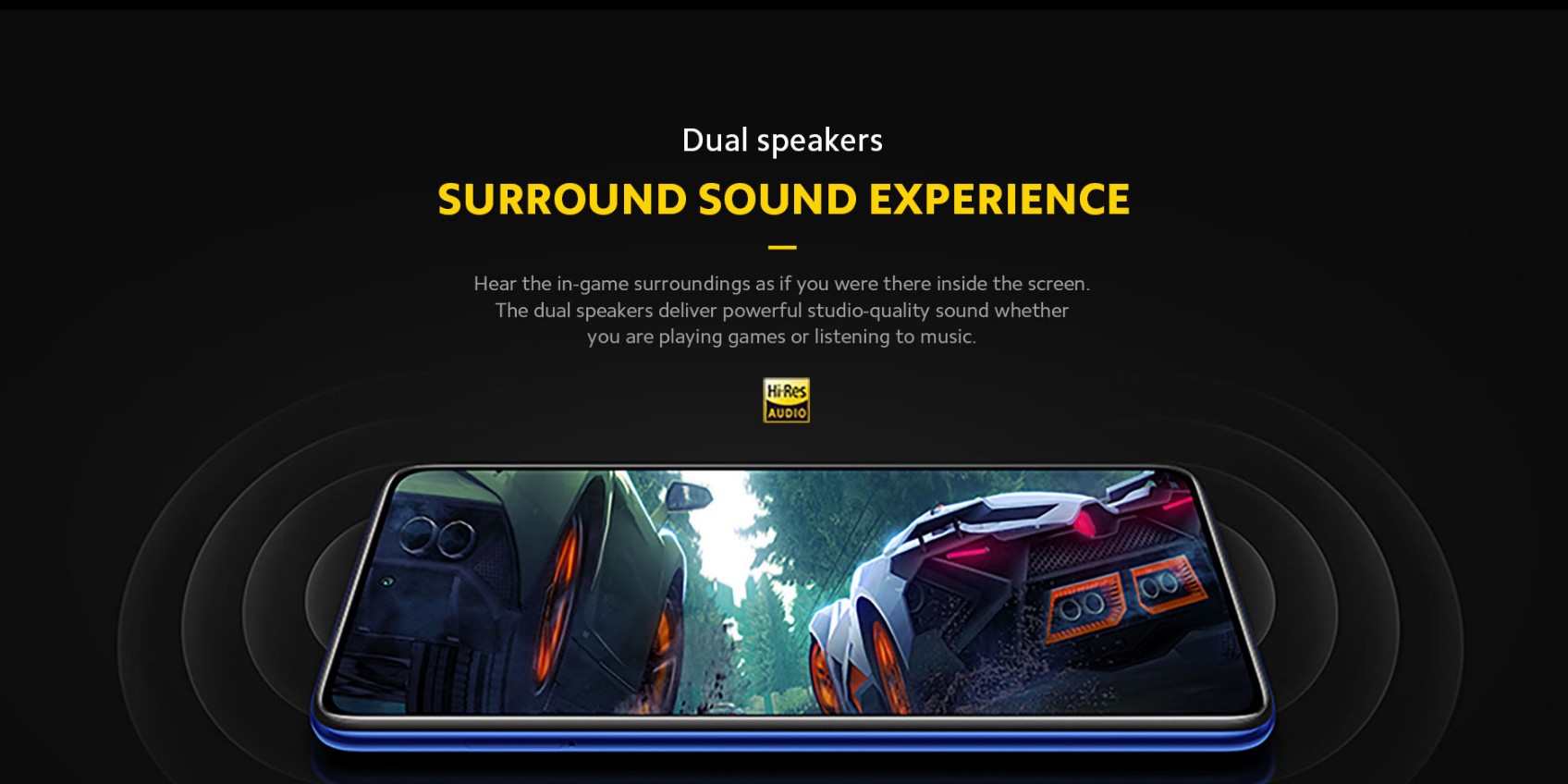 Equipped with the MIUI V12, a multilingual Android 11-based operating system, the 4G POCO X3 Pro has an international (Global) edition available in three colors: black, blue and bronze. You can find these color variants in the online stores with the following fancy names: Phantom Black, Frost Blue and Metal Bronze.

The pre-order price of €199 is even lower than last year’s opening price of the weaker hardware POCO X3, which is commendable in any case, especially from a consumer perspective.

On the Goboo store page, you can place your pre-orders for the new POCO devices today, which are expected to be available next week. Remember, the first 500 surgeries will receive a gift of a smart watch or earphones: 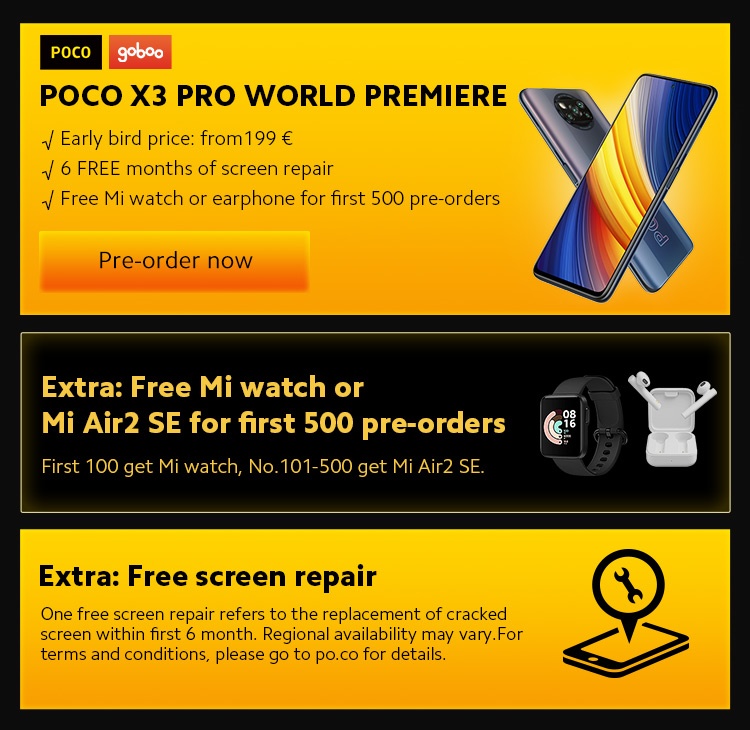