Kinatechs | 2021-01-14 21:22:00 | Source: Oukitel
Having a rugged smartphone is increasingly accessible with Chinese brands contributing to the improvement of technologies, to the increase in resistance and, mainly, to a significant increase in the performance of these smartphones.

But, after all, what makes it a "powerful and rugged smartphone” at this price? Come to know its details. 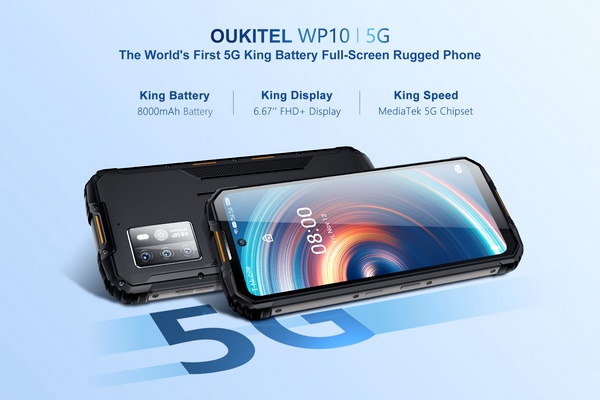 There is nothing to be surprised about the data, the device is 178 x 83.4 x 17.6 millimeters and weighs 380 grams, all thanks to the protective cover of the phone. As for the black color, with a small orange design, the phone has IP68, IP69K and MIL-STD-810G protection levels, not least because of the external protection. I really don’t go into what these cover up, it’s enough to withstand a 1.5 meter drop, but it doesn’t hurt to be water or dust, and we can even use it underwater. There is also a separate - underwater - mode for this, so you can take a picture with the phone with the hot key. There are standard buttons on the side of the device, such as the on/off and volume keys, and the SIM tray - it can accept two nano SIMs. They also come with a fingerprint reader as well as a hotkey that you can customize. Charging is now via USB Type-C port, and you can plug in a wired headset here.

The front panel features a 6.67-inch, 1080 x 2400-pixel FHD+ display. It has a 19.5: 9 aspect ratio with a pixel density of 410ppi, while protected by Corning Gorilla Glass. The front panel camera monitors events at a resolution of 16 megapixels through the camera hole drilled in the display. Its aperture is f/2.8 and it can record video at up to [email protected] A little more cameras were placed on the back, four in number. The main unit became Sony's IMX582, it has a resolution of 48 megapixels, the aperture value here is f/1.79. The wide-angle lens has a resolution of 13 megapixels (FOV 124°), while we get one macro and depth sensor unit, they work with 2 megapixels. Video can be captured at up to [email protected], and in low light conditions, the dual LED flash helps to capture light. If we’re talking about a cheap and 5G-capable mobile, it’s clear that SoC can’t be anything other than the MediaTek Dimensity 800, which is already made with a 7nm process. The GPU has become the Arm Natt MC4, there is a total of 8 GB of memory (LPDDR4X) in the phone, the storage size is 128 GB which cannot be expanded. Wi-Fi, of course, is dual-bandes, supports a / b / g / n / ac standards, while Bluetooth is 5.1 - that's welcome. We can measure our position with GPS, GLONASS, Beidou, Galileo satellites, and the NFC chip is not missing from the phone either. In addition to the standard proximity sensor - ambient light sensor - accelerometer - gyroscope - electronic compass, the phone is also equipped with a barometer and coulombometer. Power is provided by an 8000 mAh battery that supports fast charging, which can be done with a maximum of 18W.

Oukitel’s latest rugged mobile is available on Banggood for just $379.99. So currently the Oukitel WP10 is the cheapest 5G rugged mobile on the market. The Ulefone Armor 10 and Blackview BL6000 Pro, which have almost the same parameters, are currently available for $ 20 more expensive for $400.