Kinatechs | 2019-10-29 22:40:20 | Source: GearBest (Sponsored)
Special Ulefone Promotion launched the week for the popular GearBest store. Among the featured offers, you can find the Ulefone Armor series rugged mobile phones, such as Ulefone Armor 3W and 3WT or Ulefone Armor 6S.


Anyone who wants to buy rugged phone in 2019 and do not want to spend thousands of dollars on it, it is definitely worth looking through the devices of Ulefone company. This year, Ulefone has tried to strengthen this line with its products, so we can find a mobile phone that is shock, dust and waterproof in almost every price range.
You are available to the GearBest promotion on the following page:

We also selected some of the recommended mobile phones from this promotion.

In GearBest's promotion, two Ulefone Armor mobile phones were highlighted, the Ulefone Armor 3W (and 3WT) and the Ulefone Armor 6S. Both devices have protection of IP68, which means it is resistant to dust, water and a certain amount of impact, falling. In addition, the devices comply with the IP69K (enhanced protection against high pressure water) and military MIL-STD-810G standards. In my hand there were also more Ulefone surviving mobile, and one can certainly say about them that for assembly, material use is very careful during manufacturing. 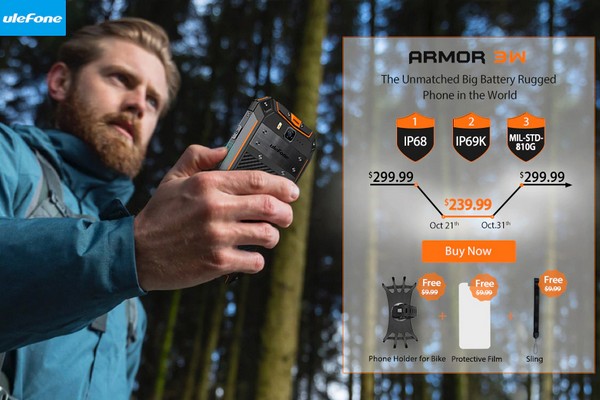 Ulefone Armor 3W and Ulefone Armor 3WT are almost identical in hardware and appearance. Armor with the extra "T" is an extra walkie-talkie feature and a related plus external antenna, which can be seen at the end of last year's Ulefone Armor 3 and 3T mobile phones.

Fitted with a 5.7-inch FHD + display, the Armor 3W has the most powerful MediaTek system chip in the mid-range, receiving the octa-core Helio P70. As a result, the new Ulefone phone has been tough, not only on the outside, but also in hardware. If we recall the past few years, unfortunately, this was not always the case: In general, the sturdy, rugged exterior behind the weak hardware worked. 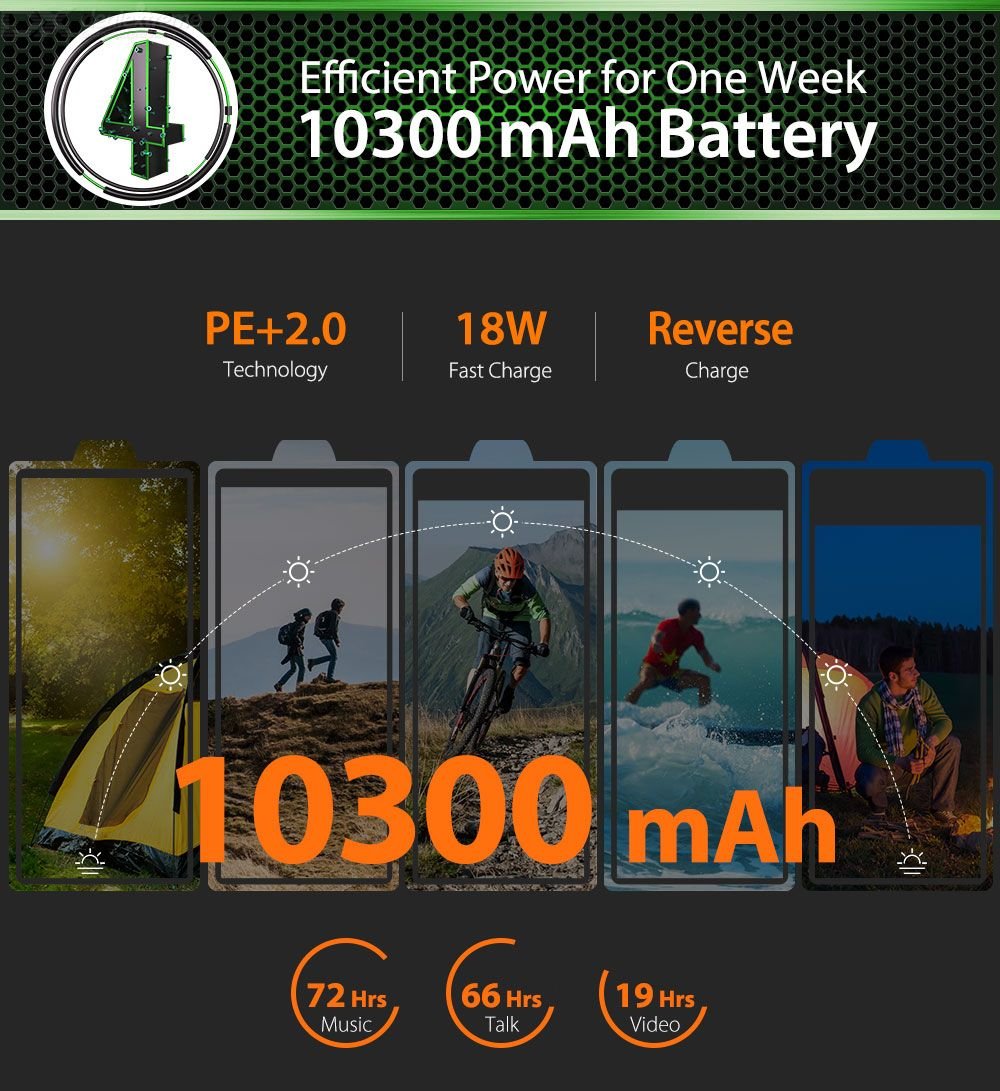 In addition to the fast and economical Helio P70, we have a huge 10 300 mAh battery that allows you to use your mobile phone for several days with a single charge. According to official data, during a charge cycle, 72 hours of music listening, 66 hours of conversation, or 19 hours of continuous video viewing are available.
Of course, the disadvantage of the large battery and the massive construction is displayed in the size and weight of the device. Despite the 5.7-inch display, the mobile size is approx. It is 165x72 millimeters and 364 grams in addition.
With the GearBest promotion, you can order a mobile phone for 239.99 dollars with excellent abilities. In addition, the orders placed between 2019 October 21-31 are accompanied by a gift bike holder, screen protector and wrist strap.
The price for Ulefone Armor with walkie-talkie features is slightly higher, at around 279.99 dollars.
You may check your bids at the GearBest store or directly by clicking on the links below:

The Ulefone Armor 6S is much slimmer compared to the phone shown above, and although it has a 6.2-inch display, it has not been larger. Its thickness is nearly half a centimeter, a weight loss of about 100 grams for 6S.

The Ulefone Armor 6S also has IP68, IP69 and MIL-STD-810G standards, so we don't need to be very afraid of external influences.
Under the back cover, the octa-core MediaTek Helio P70 works with 6 GB of memory and 128 GB of internal storage.
The size of the battery in this model is not small, thanks to the 5000mAh power source, you can take a day or two without charging for even more serious use.
The Armor 6S includes extra features such as the backlit ultra-violet light sensor, 10W Qi wireless charging capability and NFC.
The Android 9.0 operating system is up-to-date and, of course, similar to all Ulefone mobile phones, it contains multiple languages.

You can now order the Ulefone Armor 6S mobile phone in the GearBest special promotion for 279.99 dollars. The offer is available on the Web-shop page or by clicking on the link below:
BUY ULEFONE ARMOR 6S
Price: 279.99 USD

You can buy the Ulefone Armor 6S a little cheaper, true in the version 4 GB of memory and 64 GB of internal storage. Ulefone is distributing this model as Ulefone Armor 6E and its current price is around 199.99 dollars. You can find this action here: 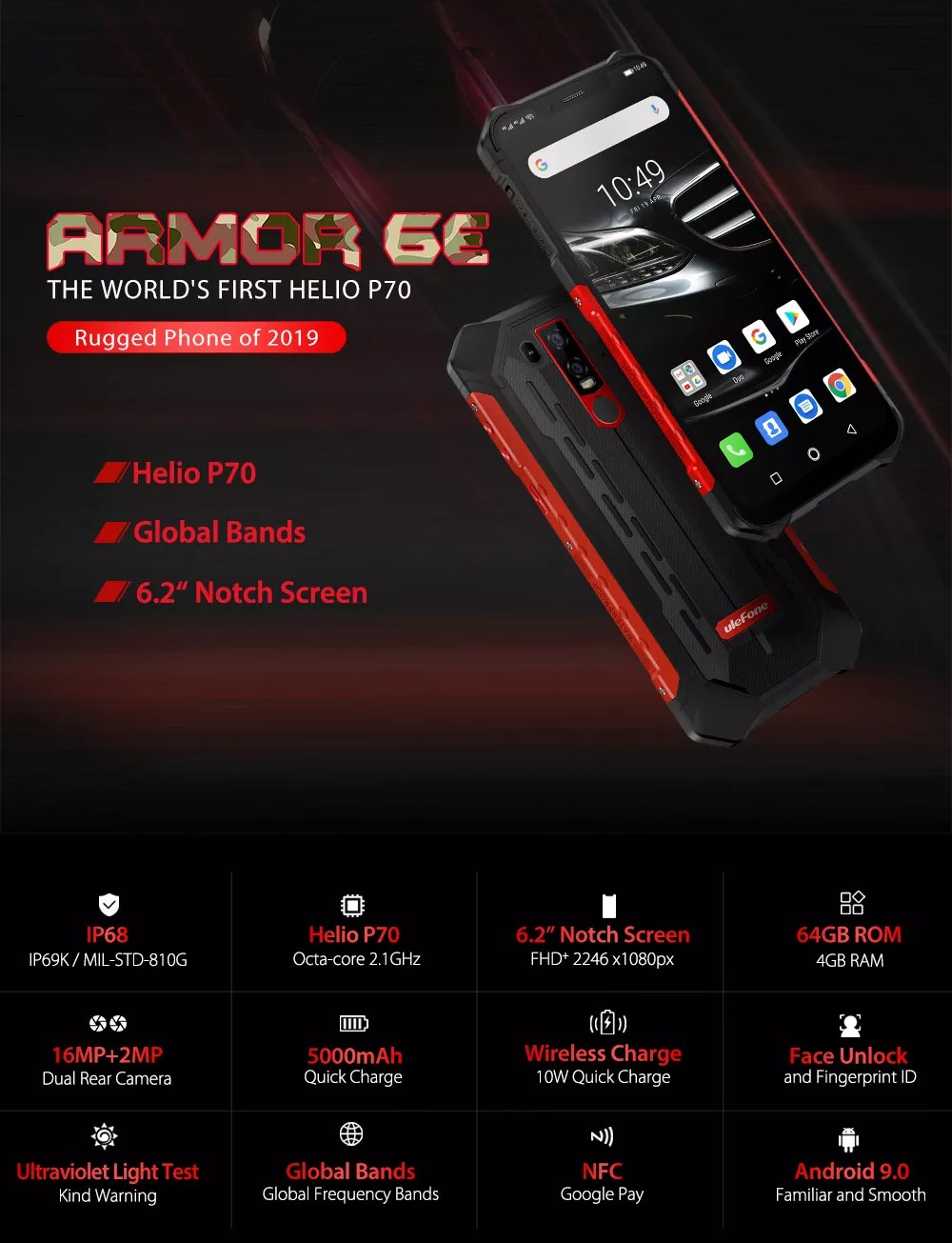 For more discounted Ulefone mobile phones like the latest Ulefone Armor 7 or the entry-level Ulefone Armor X5, you can find it on the GearBest promo page.
More news