Kinatechs | 2020-03-29 23:16:28 | Source: GearBest (sponsored)
Yesterday, the international versions of Xiaomi Mi 10 were unveiled, and you can order them today. What's more, the first 1000 customers are now getting a great deal on this year's Xiaomi top model.

In February this year, Xiaomi unveiled two of its flagship models, the Xiaomi Mi 10 and Xiaomi Mi 10 Pro. We have become accustomed to launching phones for the Chinese domestic market first, Global, or international versions only later.

Fortunately, we didn't have to wait too long for the Mi 10, with the announcement yesterday of the international release of the phone, which has already received multilingual operating system and international LTE (B20 support). According to the official site, however, the Global Edition does not receive Dual SIM but only Single SIM. This is a somewhat incomprehensible decision by Xiaomi.
In our article, the Mi 10 is expected to start at 799 Euro in Europe. Now, with the launch of GearBest, you can order the Xiaomi Mi 10 at a much lower price than this.

Featuring 8GB of RAM and 128GB of storage, the Xiaomi is priced at $719.99, and you can save $20 with the GBMI10SALE coupon code. Including the discount, $699.99 must be left at the virtual checkout for this year's Xiaomi top model. That is not a small amount, but if you look at how high end mobile phone prices have gone this year (OnePlus 7T Pro, Samsung S20 Ultra, iPhone 11 Pro) then it is understandable.

You can find the GearBest promotion page here:

The Xiaomi Mi 9 last year was a huge success worldwide and at home. And this will not be the case with the 10 Series, albeit due to production outages caused by the pandemic, it is expected that greater demand for new devices will begin later.

The Xiaomi Mi 10 is the first Mi model to receive 5G support. True, this is not new on Xiaomi models, as last year the Xiaomi Mi Mix 3 and this year the Redmi K30 had a 5G version, but we have not seen it in an international release yet.
Another innovation is Wi-Fi 6 (802.11ax) support, which can be up to 30% faster than its predecessor, Wi-Fi 5 (802.11ac). Your device also supports 5G MultiLink, which means you can use mobile, 2.4GHz and 5GHz Wi-Fi networks at the same time. 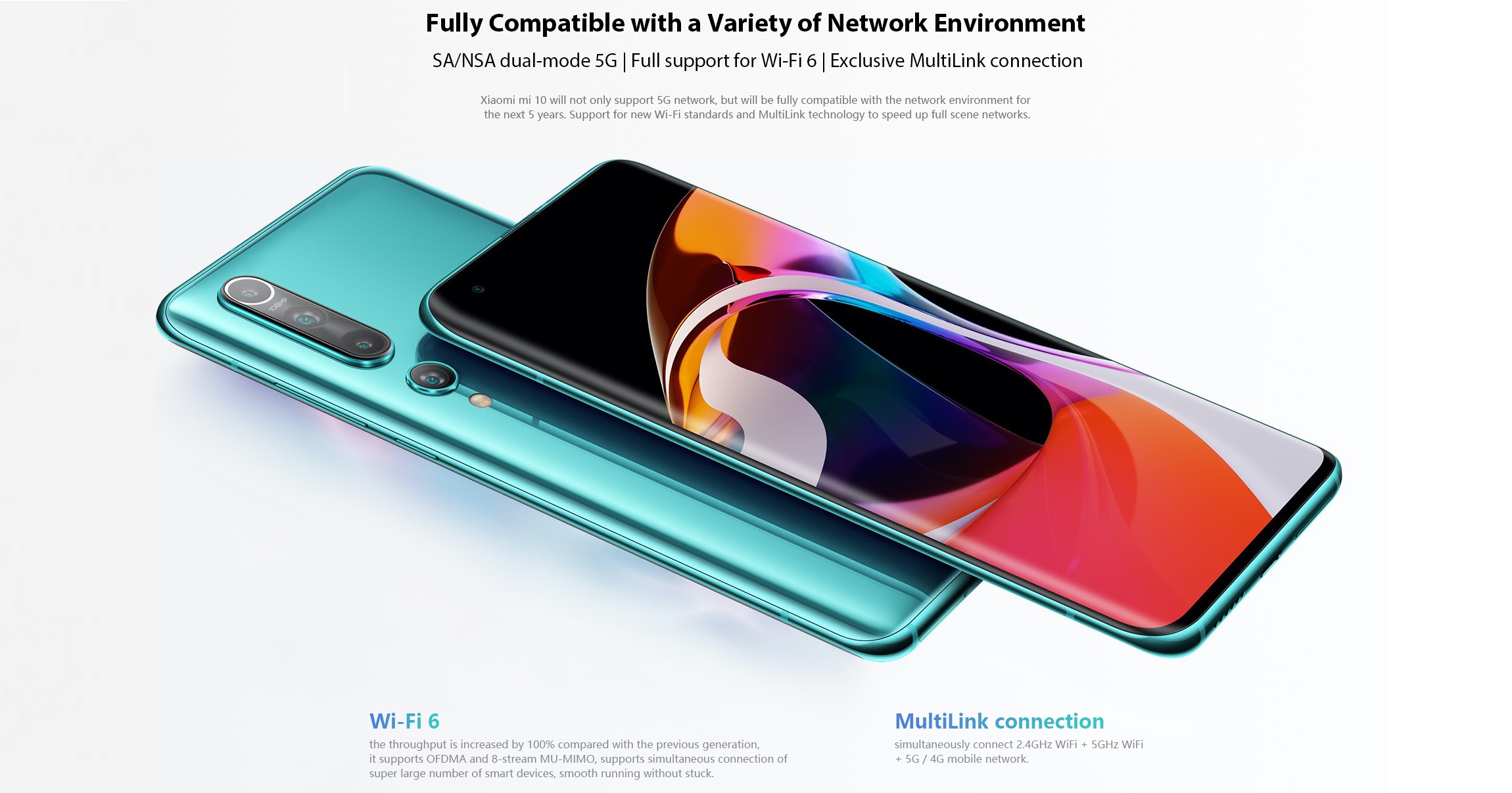 Of course, the new series also received much stronger hardware: the Qualcomm Snapdragon 865 with 7nm technology is nearly 25% faster than its predecessor, while running 25% less compared to its predecessor. Next to the fast processor is the new generation LPDDR5 memory and the UFS 3.0 mass storage, which vary in size in different packages. The overall picture is certainly respectable, as evidenced by its nearly 600,000 points in the popular Antutu benchmark program.

The display has grown following trends, as compared to last year's model: the front panel features a 6.67-inch AMOLED display with 90Hz refresh rate and 180Hz tSampling Rate with HDR + support. When refreshing the page or browsing information, you will enjoy unprecedented smooth operation. The sensitivity is greatly improved. This is your perfect choice if you love e-sports games.
And with 1120 nit Peak Brightness, you can expect great contrast and extremely high brightness.


The number and resolution of the back-facing cameras has also increased, compared to its predecessor Mi 9: the biggest sensation is undoubtedly the 108MP 1/1.33 "Samsung image sensor with optical Image Stabilizer. By default, photos are taken with pixel binning, Instead of 108MP, it produces detailed, high-quality 27 megapixel images.
For video streaming, the high-resolution sensor and fast processor provide 8K shooting at 30 frames per second, along with the usual 4K 30/60fps and 1080p 30/60fps recording modes.
Next to the main camera is a 13MP wide-angle, 2MP macro and 2MP depth sensor unit. 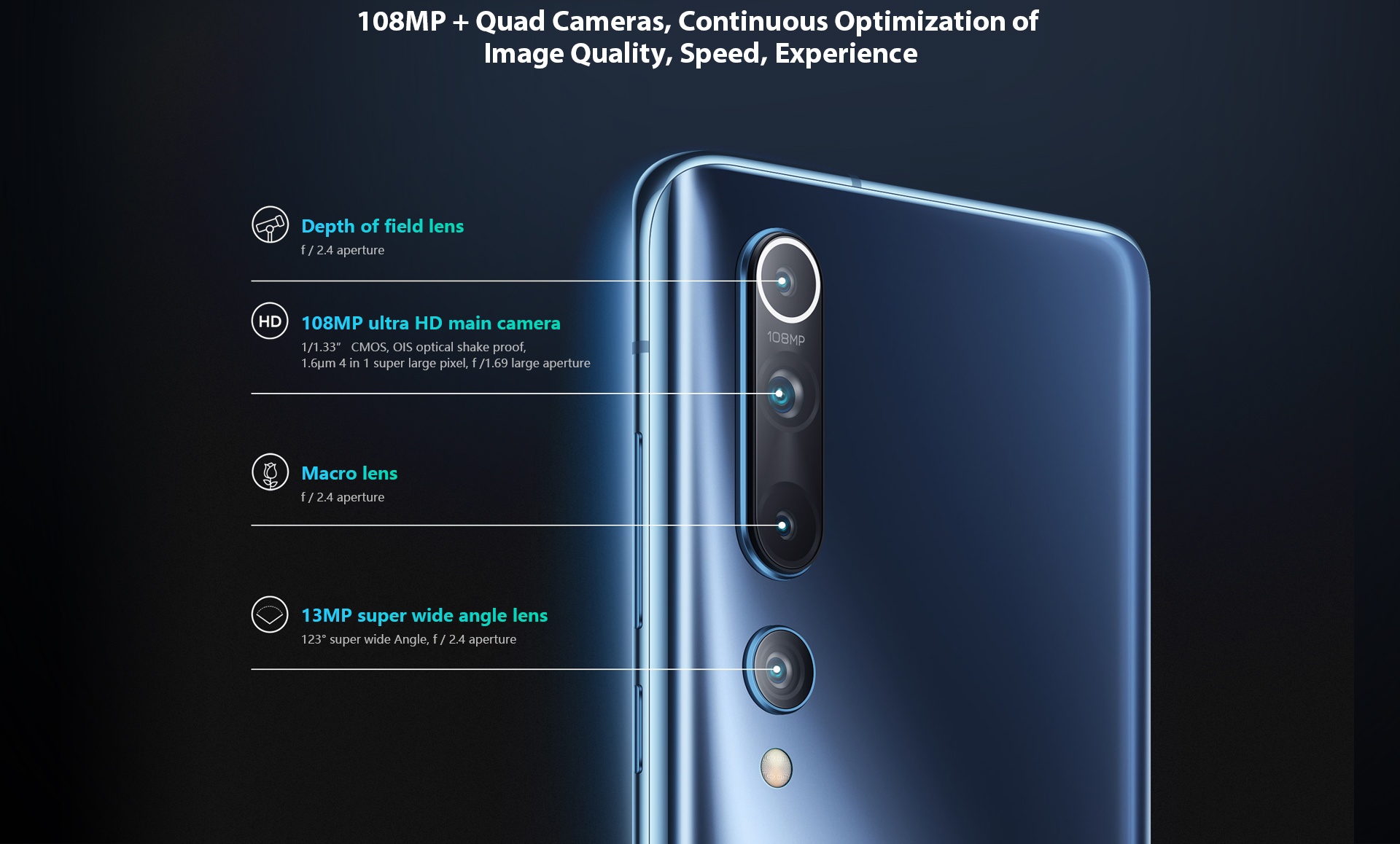 Fortunately, the manufacturer has met user criticism, increasing its capacity of last year's top-of-the-line 3300mAh battery by nearly 1.5 times to 4780mAh. When discharged, it can be fully charged in about 57 minutes with the 30W quick charger. The 30W charging power works on both wired and wireless lines, and you can charge another device wirelessly, in which case 10W is the maximum.

For more features and promotional images of Xiaomi Mi 10, visit our page on our Mi 10 datasheet:

You can also access the current Mi 10 promotion directly from our site or from the GearBest promotion page. Remember to use the $20 value  GBMI10SALE coupon code: